Workers' Week and Labour Day to focus on children 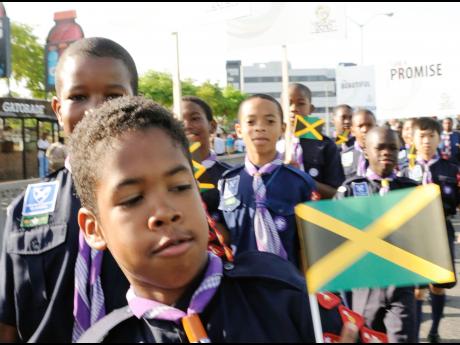 Cub Scouts from St Andrew march to the Half-Way Tree Transport Centre in St Andrew yesterday for the launch of Labour Day 2010. Labour Day will be held under the theme 'Our Children ... Show Them We Care' with special focus on children in state care. - Ricardo Makyn/Staff Photographer

THE HUSTLE and bustle of early-morning traffic in Half-Way Tree, St Andrew, was less monotonous to onlookers yesterday as the beat of drums and the blaring of horns from the St Patrick's Foundation All-stars marching band led a stream of children towards the transport centre.

Some of those children, members of the St Andrew Cub Scouts, were joined by ministers of government and pedestrians as they marched from the clock in Half-Way Tree to the transport centre where they were to help launch Workers' Week and Labour Day 2010.

Olivia Grange, minister of culture, youth and sports, said this year Jamaicans should focus on children, especially the most vulnerable among them.

Grange said cuts in the Budget meant corporate Jamaica needed to do more to help with this year's activities.

There will be 14 projects across the island, preceded by a big media campaign.

Mike Henry, minister of transport and works, in supporting the focus on children this year, said the Jamaica Urban Transit Company (JUTC) ould, on July 1, begin displaying the pictures of missing children.

The JUTC will be putting up the displays in the Metropolitan Transport Region.