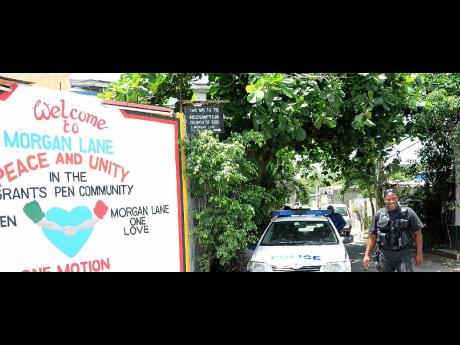 It was déjà vu for a family in Morgan's Lane in Grants Pen, St Andrew, early yesterday morning, as the sound of gunfire summoned them back to a scene they had visited less than three years ago.

This time, the family members returned to the intersection of Grants Pen Road and Grants Pen Avenue to see the body of 19-year-old Suckay 'Bebe' Cross of a Morgan's Lane address and her boyfriend, 27-year-old Damion Walford, otherwise called Swallow, of Grants Pen Road.

As the tears flowed, Bebe's family members noted that her body was in almost the same spot where her aunt Una Evans had been killed in August 2007.

"It is like them a kill off the innocent members of this family one after the other and like them nah go stop," a family member told The Gleaner while fighting back the tears.

"Bebe was a very jovial person, not involved in any dispute, and she was somebody who would do anything for anybody. She and everyone get along quite well," the family member who preferred not to be identified said.

The police were yet to establish a motive for the double killing, which took place about 12:10 yesterday morning.

But residents of Morgan's Lane believe love caused 'Bebe' to commit the cardinal sin of crossing the imaginary border into an area controlled by their traditional political rivals.

"Bebe just deh at di wrong place at di wrong time and she nuh suppose to deh deh. We down here a PNP (People's National Party) and them up there a JLP (Jamaica Labour Party) and politics never stop fight inna Grants Pen even when no shot nah fire," said a resident of Morgan's Lane.

"Grants Pen never cool. You just have a thing in a Grants Pen that name ceasefire. When man ready fi pick up them gun again, a mad thing, serious thing."

That potential for further violence is accepted by the police, who note that the area has been relatively peaceful for some time.

"We are keeping a close watch on the community to ensure that this does not destroy the peace and escalate," one policeman said as he patrolled Grants Pen Road yesterday with his firearm at the ready.