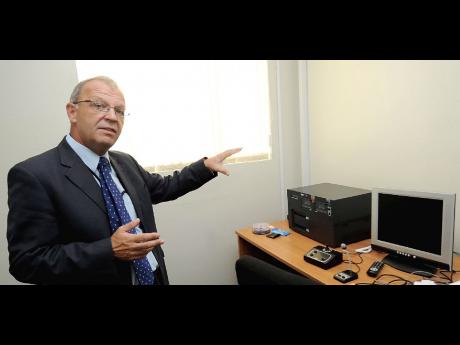 ONE OF of the major issues which Police Commis-sioner Owen Ellington will have to address is the worsening problem of violence in schools. More students are getting involved in violent activities such as stabbings, sometimes fatally.

Peace and Love in Schools (PALS), a non-governmental organisation, has facilitated the training of 150 school resource officers (SROs), who are charged with keeping the peace inside and outside the classroom.

These SROs are police personnel who have been exposed to training in issues related to anger management, problem solving, school culture and classroom management.

Assistant Commissioner of Police John McLean, who is in charge of community safety and security, said though several anti-violence measures have been introduced in schools, a full evaluation of the Safe Schools Programme needs to be done.

"I think there's a lot of action being taken just now that we'll have to face over a longer period of time before we can determine how successful these have been on violence in schools," McLean told The Gleaner.

McLean said in recent months there had been a significant increase in the number of schools targeted under the programme, with the deployment of an additional 80 district constables, including 60 who participated in the PALS training over the last few weeks.

According to McLean, the police have been working closely with the Ministry of Education on a number of school safety programmes, including the establishment of security-post guidelines and the introduction of deans of discipline.

McLean said anti-gang strategies, including the deployment of closed-circuit television cameras, had been introduced to reduce gang activities in schools.

In the meantime, Sergeant Judith Pownall, an SRO trained under the PALS programme, said despite some challenges, the programme has been largely successful. Pownall said SROs typically deal with worrying issues within the school community as soon as they arise.

However, she said the subculture of violence endemic to some communities had been transplanted in schools.

"Sometimes, they'll throw words at each other and it will cause fights, especially if it involves their parents," said Pownall.

"The fight will escalate outside the compound after school because they are aware that if you fight on the school compound, then that's a suspension for the day."

Pownall was supported by Corporal Joseph Forbes, an SRO based in St James.

According to Forbes, most of the challenges come from students attending primary and junior high schools in volatile communities such as Glendevon and Mount Salem.