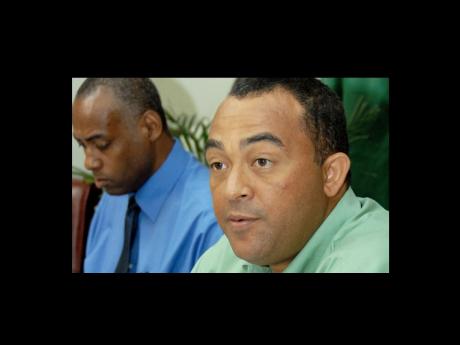 Minister of Agriculture and Fisheries Dr Christopher Tufton speaking at a media briefing at his St Andrew offices on Tuesday. - Contributed

Severe drought conditions have dried up much of the growth registered in the agricultural sector over the last calendar quarter of 2009, with an anaemic 3.1 per cent uptick recorded over the three months ending March 31.

While it was a far cry from the 33.5 per cent growth in the industry from October to December 2009, agriculture was recording its seventh straight quarterly expansion since mid-2008, the Ministry of Agriculture and Fisheries revealed at a press conference on Tuesday.

The drastic drop in growth is an apparent indicator that the water woes affecting the island since last summer only begun to hurt farms towards year end.

Cultivators in the country's southern belt, such as St Elizabeth, - dubbed the Breadbasket Parish for its gamut of crops - were badly affected. St Elizabeth's output declined 8.7 per cent.

However, increased rainfall in April - long regarded as one of Jamaica's wettest months - portends improved circumstances for loss-hit farmers.

The National Water Commission's easing of water restrictions to householders and commercial entities earlier this month was another signal that the island might be turning the corner.

"We expect to see very strong growth at the end of this quarter," Agriculture Minister Christopher Tufton said Tuesday.

Fruits were hardest hit by the dry spell, plummeting 50 per cent, while legumes and vegetables declined by 23 per cent and 6.9 per cent, respectively. Coffee farming was also stung by the weather with a 28 per cent fall.

Despite the downward trends, there were upswings in other crop profiles.

Irish potato grew by 125 per cent, accounting for a boom in St Mary which recorded a 107 per cent jump in its overall agricultural output. Hot pepper production climbed by a scorching 83 per cent, plantain soared 44 per cent and sugar cane rose 15 per cent.