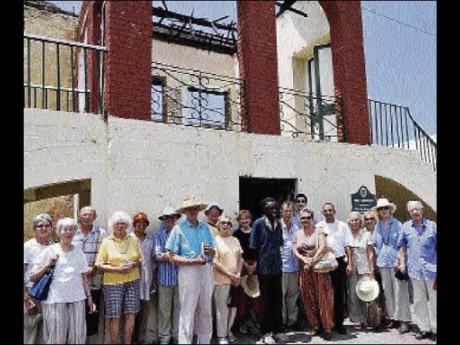 Members of the Friends of the Georgian Society of Jamaica stand in front of the Morant Bay Courthouse in St Thomas. - Contributed

Eighteen members of the Friends of the Georgian Society of Jamaica (FGSJ) are spending two weeks touring a number of Jamaica's historic buildings.

The FGSJ is a United Kingdom (UK)-based group, affiliated to the Georgian Society of Jamaica, and has for nearly two decades raised funds to support the preservation and restoration of Jamaica's Georgian buildings. Most notable are the Post Office and St Peter's Church in Falmouth, Lucea Parish Church, the Iron Bridge in Spanish Town and St Mark's Church in Rio Bueno.

This is the fourth tour by members of the FGSJ. Several of the current tour members were born and grew up in Jamaica, some worked on the island earlier in their careers, and one or two are descended from people who made Jamaica their home in earlier times. All are imbued with a love of the island and a desire to preserve and learn about its heritage.

Douglas Blain commented: "Jamaica's historic buildings are of world importance. It is vital that Jamaicans, who after all were responsible for building them in the first place, are involved in their preservation as part of the country's effort to encourage heritage tourism."

The trustees of the FGSJ are always keen to identify new restoration projects to support, and part of the tour's brief is to look out for suitable projects. One potential project that caught the group's eye was the Morant Bay Courthouse, which was burnt out a few years ago. Rather than partially restoring the building, as is currently proposed, the group felt it would be better to make it fully serviceable as a Paul Bogle Museum, with the potential to introduce generations of Jamaican children to the history of their island. Later in their tour, the group will spend a morning with Dr Jim Parrent of Falmouth Heritage Renewal, being briefed on the progress of current projects in the town, and will meet members of Georgian Society of Jamaica chapters including those in St James, Trelawny, St Ann and St Andrew.

Peta Gay (Stockhausen) Jensen, a member of the tour party and author of the book The Last Colonials: The Story of Two European Families in Jamaica (2005), said: "With the increasing emphasis on heritage tourism worldwide, it is doubly important that every effort is made to preserve Jamaica's fine Georgian buildings."