Odin ready for Dig out 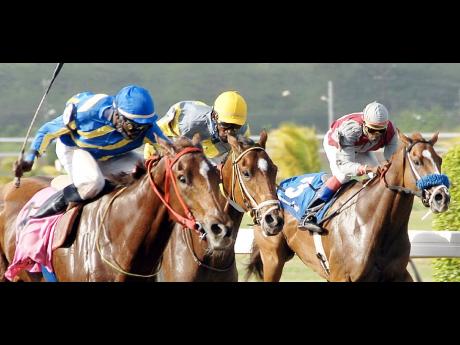 ROYAL DREAMER (left), ridden by Kerry-gayle Robinson for trainer Ryan Darby, gets the better of rivals to win the seventh race over 1300 metres at Caymanas Park on Wednesday, at odds of 9-2 . - Colin Hamilton/Freelance Photographer

Thanks to a 10-1 upset by SAMBA DANCER, the Pick-9 had no takers at Caymanas Park on Wednesday and the carryover to tomorrow stands at a whopping $2.9 million.

This should ensure a payout in excess of $4 million if caught. The Super-6, meanwhile, starts anew with its guaranteed minimum of $750,000 after being caught by 56 punters, each receiving $28,700. The Pick-9 will embrace all nine races on the programme, while the Super-6 will be conducted from race four to nine.

The programme will mark the return of the popular Dig Out Handicap in the closing race each day. Previously sponsored by Track Price Plus up to January of this year, the series has a new sponsor in Alex's Import Limited, a company owned by popular racehorse owner, Alexander Haber.

At Tuesday's press launch in the Trainers' Room at Caymanas Park, it was announced by the company's general manager, John Edwards, that Alex's Import Limited will be putting up $20,000 for each race, this to be shared equally among the owner, trainer, jockey and groom of the winning horses.

If that wasn't enough, Alex's Import will donate a further $120,000 (bonus) every six months to the series' winners and runners-up, to be determined by points.

Recent winner MISS ATLANTIC STAR should get Super-6 players off to a perfect start when she takes on eight opponents in the fourth race over 1500 metres for $180,000 claimers.

MISS ATLANTIC STAR won easily over 1600 metres on April 10 and although failing to follow up behind SAMBA DANCER on April 21, was not disgraced (fourth) and should rebound at the expense of MR. WICKER and THE SMOKER.

Then, TRAIN TRACKER BOY, having finished second to the progressive HEARTOFACHAM-PION recently, looks the one to beat in the knotty-looking sixth race over 1600 metres for three-year-olds, a race in which SILENT IMAGE, MISTER INFORMATION and SHAWN'S GIRL should keep him honest.

Then, take LIGHT MY FIRE (near miss on last) to upstage BIG MAN and YAMASHITA'S GOLD in the seventh over the straight, THE CHIEF in the eighth over 1100 metres for overnight allowance horses and ODIN, who lost out to REAL MINISTER in a blanket finish on his recent debut, to make amends in the Alex's Dig Out Handicap.