'The Sheriff' almost steals the show 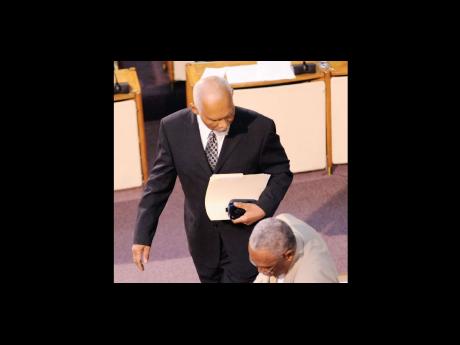 K.D. Knight returned from his two-sitting suspension in the Senate on Friday to resounding applause from Opposition members.

As Knight walked slowly down the aisle of the chamber yesterday, his colleagues thumped their desks, gleefully welcoming the senator.

This acknowledgement briefly interrupted a presentation that was being made by National Security Minister Dwight Nelson.

Last month, Knight described Leader of Government Business in the Senate Dorothy Lightbourne as "rude and stupid" during a verbal clash with the senator.

When asked to withdraw the comment, Knight told Senate President Oswald Harding that he had read Erskine May's Parliamentary Practice and it said he could say so.

May's, the authority on parliamentary procedures, regards as unparliamentary, "abusive and insulting language of a nature likely to create disorder".