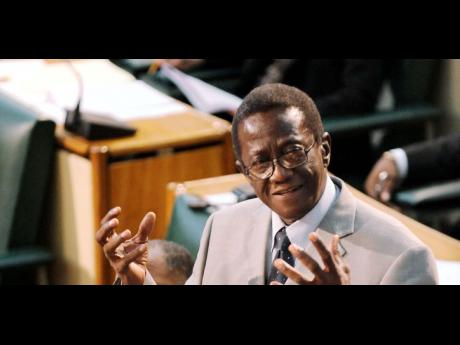 FRIGHTENING ESCALATING murder figures have jerked the Government into action as it updates its national security policy to focus on community crime-fighting initiatives.

Yesterday, National Security Minister Dwight Nelson said the administration was seeking to build and consolidate local strategic partnerships as it tackled the scourge of crime and violence.

Making a statement in the Upper House yesterday, the minister said the approach would involve the reactivation and expansion of parish crime committees.

As part of the new thrust, Cabinet has approved the establishment of an inter-ministerial committee on community security.

The committee, chaired by Nelson, will work to harmonise social-intervention and crime-prevention activities among relevant ministries.

At the same time, the administration is moving to revitalise neighbourhood watches.

And Nelson, contending that there were no easy answers or quick fixes for the country's frightening crime problem, made an impassioned plea for Jamaicans to notify the police about criminal acts, even if they were carried out by friends or relatives.

He sought to persuade Jamaicans that information supplied to the police through 8-1-1, 3-1-1 or 1-888-CORRUPT could not be traced.

"Through these safe channels, any citizen can make a difference," he stressed.

"My message to every citizen is that if you have relatives or friends who you suspect to be involved in scams, drugs, guns or other illegal activities, alert the police," he said.

"A criminal offender in a home today is an immediate security threat to the entire family," he added.

Nelson told his colleagues in the Upper House that he understood the concerns of Jamaicans in relation to the levels of crime in the country.

With more than a dozen murders in the last 36 hours, Nelson conceded that the "climate has been particularly unsettling, with daily reports of a continuing increase in crime, shootings, and murders in particular".

He said despite the many studies that have examined the cause and effect of crime in Jamaica, and the numerous recommendations and suggested approaches in the search for solutions, the crime problems have deteriorated.