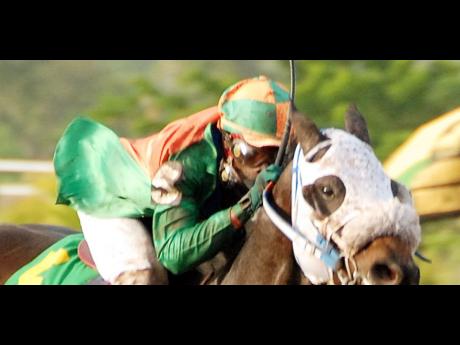 FOREVER MINE, with Trevor Simpson aboard, sprints away from the field to win the 3-y-o & up Open ALlowance event, race nine, over 1100 metres at Caymanas Park on Wednesday. FOREVER MINE, the 1-1 favourite, won by 3 1/4 lengths from COMMANDER ZERO. - Colin Hamilton/Freelance Photographer

The season's first two-year-old race, for the Starters' Trophy, is the feature event at Caymanas Park today.

The Philip Feanny-trained bay filly, ANNIE OAKLEY, looks forward enough in her preparation to open her account right away in the Starters' Trophy over 400 metres straight.

By Royal Minister out of Mississippi Train, which makes her a full sister to the speedy SUPER DAVE, ANNIE OAKLEY has been showing good speed at exercise and going the minimum trip, which is the norm for juveniles at this initial stage of their career, gets the nod over the Delroy Waugh-trained BLACKMAN STORY (extensively prepared), and ELECTRIFYING (working fairly well) from the stables of Anthony 'Baba' Nunes.

The nine-race programme also marks the return of the popular Dig Out Handicap, which offers added incentives to the winning connections.

Designated as the closing event on each programme, hence the term Dig Out, the race has a new sponsor in Alex's Import Limited. The series was launched on Tuesday at a press briefing in the Trainers' Room at Caymanas Park.

John Edwards, general manager of Alex's Import Limited, representing popular owner Alexander Haber, the company's CEO (who was off the island), said the sponsorship is substantial.

Alex's Import will donate $20,000 each raceday to be shared equally among the owner, trainer, jockey and groom of the winning horse, while they will contribute a further $120,000 bonus at the end of each six-month period to be shared among the series winners and runners-up (determined by points).

Previously sponsored by Track Price Plus bookmaking company up to January of this year, the event, now to be called the Alex's Import Dig Out Handicap, will be contested by 14 native bred maiden three-year-olds over 1300 metres.

From all indications, the race should provide keen competition among the likes of ODIN, who went close on his recent debut; the highly fancied pair of MUMBAI MAESTRO and RIVERTON, as well as UNSUNG HERO, SAINT JACORY and REGIONAL CHARMER.

The Nornan Palmer-trained ODIN showed promise on his April 5 debut when running on strongly to finish third to the REAL MINISTER in a blanket finish over the straight five course.

Now better for the experience and the trip more to his liking, the bay colt by Traditional out of Zig's Quiet Lady should prove too strong for MUMBAI MAESTRO and RIVERTON in the closing stages. Allen Maragh again has the ride.

Other firm fancies on the card are the consistent PATARA over BULLET LINE in the second race; MISS ATLANTIC STAR to rebound in the fourth; NEPTUNE to catch CLASSY COMPANY in the fifth; and THE CHIEF to upstage PATTA in the knotty-looking overnight allowance sprint.