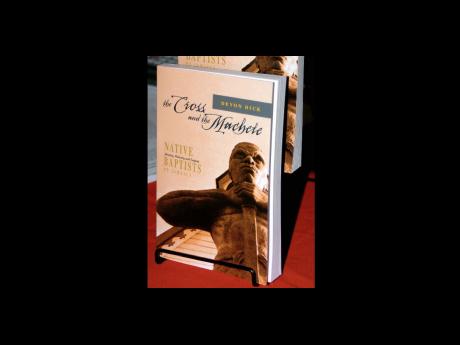 Title: The Cross and the Machete

This is the second book by Devon Dick which deals with Jamaican church matters.

The Cross and the Machete as a title, weaves an underlying thread throughout the book and carefully underscores the contrasts at times between the violence of the machete and the message of forgiveness and peace of the cross.

The book of some 300 pages has seven chapters and it can well be said that chapter one, the introduction, and chapter seven give important insights into the objectives and message of the book. Sandwiched between these two chapters are the details of the case that is being made on the Native Baptists. The launching of the book, which has significant passages dealing with Paul Bogle and the image of the Edna Manley statue on the cover - which incidentally was an inspiration - is interestingly coincidental with the current controversy of those who want a 'real Paul Bogle statue'!

The reader will recognise from the start that this is a scholarly volume and Dick comes across as a teacher and careful researcher. The book has 25 pages of bibliography references and more than 1,300 individual references are cited. The author travelled far and wide in his historical search and the case he is making is well buttressed with facts or appropriate citations.

What is Devon Dick's aim in the publication? Briefly, it may be stated as:

To identify who the Native Baptists were.

To show that the motivation of Pastor Paul Bogle and Assemblyman George William Gordon were motivated by a Christian ethic that challenged issues of inequality and injustice.

To articulate the significant role that the Native Baptists played in the mid-19th century and in particular the religious climate.

To challenge widely held historical perceptions about Jamaica at the time and the conflicting views of the Baptist War of 1865 described in official circles as the Morant Bay Rebellion.

It may well be said that the author makes the case he set out to establish.

The context is the historical journey from the arrival of George Liele in 1783 from America to the execution of the Native Baptist pastor, Paul Bogle, in 1865.

In the introduction, the author argues that the Native Baptists have not received their due from the historians and a number of erroneous notions about their beliefs have been challenged, such as the idea that their beliefs would be synonymous with obeah, myal, kumina, convince and revival. He also argues that the Native Baptists had a sound Biblical basis and their perceptions were fundamentally based on the principles of justice and fair treatment of the slaves. They were not superstitious, insignificant and violent.

The establishment of the Jamaica Native Baptist Missionary Society, patterned from overseas organisations with a structure, buildings, schools, financial base, regulations for membership, quality leaders, a clearly defined mission and a central office was a remarkable achievement in those days.

It was also important to recognise the role that Liele - who though he aligned himself with the English Baptists and the Baptist Missionary Society - played in encouraging the Native Baptists. In addition the support of Assemblyman George William Gordon was critical in giving a level of legitimacy to the movement. The native Baptists believed in the role of human action to change circumstances, and held the view that political involvement was the natural outcome of their Christian faith. The scriptures provided a basis for envisioning alternatives to those imposed upon them by the oppressors.

This led to the principle of liberation as an inalienable right of the human spirit and ultimately led to the protest and action of the Native Baptist war of 1865. In dealing with this important historical event in Jamaica's history, the author outlines and challenges some of the 'positions' that were taken in historical retrospect to the event. Paul Bogle emerges as a 'Freedom Fighter' of the highest level and a leader who brought his Christian faith to the fore in concerns for justice and liberation

"The goal of the 1865 Native Baptist War was not to install the Haitian model, the Maroon example or the American Christian uprisings, but was more akin to the model of Sam Sharpe. The aim of the resistance was not to have racial governance or separated governance, but to have a just and caring government to the benefit of all. There was no intention to wrest power from the constituted authority and establish an independent political system. Instead, it was a quest to change their situations so as to fulfil their own potential for the benefit of all - the rulers and the ruled."

Operated with a freedom that it was presumed they did not have.

Exemplified the spirit of innovation and self-confidence.

Displayed a pride in being 'native' and relished their African ancestry.

Left a legacy which was beneficial to the Baptist Church in Jamaica.