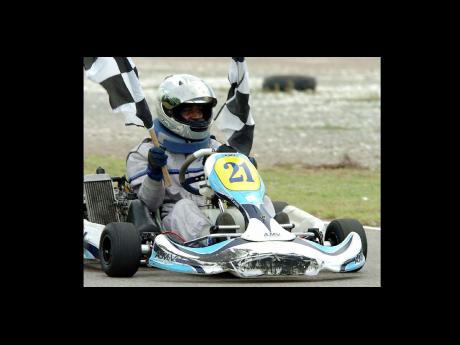 Jamaica Karting Association (JKA) will have a special treat on Mother's Day, May 9, at the Palisadoes International Raceway, Kingston, where the cream of the crop of racers will renew their rivalry.

Next Sunday's meet is the final of the new-look quarterly championship and should facilitate young karters who are sitting exams.

But while the karters are fine-tuning their preparations, some mothers are bracing themselves for a perfect Mother's Day gift at the track.

"Well, my son will be racing out of his class, against the bigger boys. I want him engage them, just race with them and that will make my day," said Heather Eaten, the mother of nine-year-old Mark Anthony Eaten who is scheduled to compete in the Mini Max class.

Stephanie McConnell of Tru-Juice expressed a lot of confidence in her 10-year-old son, Fraser, and wants him to do his best.

"I want him to give enough of himself, do his best. I tell him every day, never give up, whether he his finishing first or last. Just never give up," said McConnell. Fraser is expected to compete in the Mini Max class.

Lisa Sirgany wants her eight-year-old son, Justin, who should contest in the Micro Max class, to give his all.

The meet is expected to buzz with excitement as a number of the karters who have been participating at the various overseas race meets will renew rivalries. Among the big guns favoured to win the respective titles are Joshua Sirgany in the Micro Max Class. Colin Daley, Jr, looks safe in the Rotax Junior Class. At a Florida meet last week, Daley finished fifth in the finals of the Rotax Pan American Challenge event. According to Sammy Law of the NG Racing Camp, Daley's lap times were very impressive. He believes that based on that performance, he should dominate the local meet next week.

William Myers has been in good form and looks like a winner in the Mini Max Class.

Garth Genus is hoping to hang on in the Masters Class while veteran Mike Simmons is set to top the Super Masters Class.