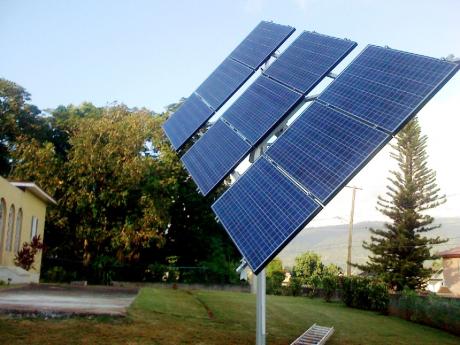 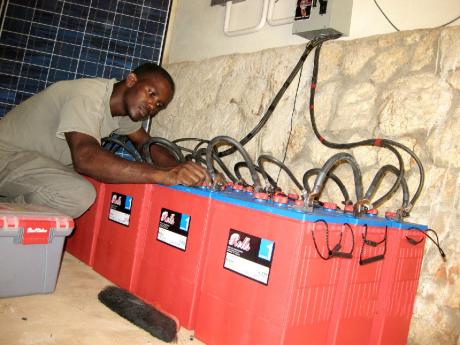 Morris Hutchinson working on a battery cluster for a solar panel installation. - Contributed
1
2

Morris Hutchinson, a 30-year-old mechanical engineer, parlayed his expertise into a new business that sells alternative-energy supplies, and in less than two years of operation, has cornered business from seven parishes in Jamaica.

Hutchinson works with Carib-bean Cement Company Limited but has long had an interest in energy technology.

He acted on it two years ago and formed Alternative Energy Plus (AEP), based in Portmore, St Catherine.

His company, for which he is director of operations, now serves a client base consisting of homeowners and business persons in seven parishes nationwide.

His market are those who want to wean themselves from the national electricity grid or are trying to reduce their energy bills by consuming less of the Jamaica Public Service Company-produced supplies.

But AEP is far from being the only player in this market. Hutchinson said while his fledgling enterprise faces stiff competition from the growing alternative-energy sector, the company is well-positioned, he claims, as the only registered renewable-energy company in Jamaica that provides solar tracking technology when installing photovoltaic panels.

Solar tracking technology is so engineered to clients to harness 30-40 per cent energy from the sun as it rotates with the sun throughout the day.

Hutchinson's passion for renewable energy, he says, was developed while pursuing a renewable-energy course at the University of Technology in 2008, and increased after the completion of a bachelor's degree in mechanical engineering and acquiring a home in Portmore.

He undertook intensive research, with the "goal of setting up a hybrid - wind and sun - system when I purchased my home in Portmore", he told Sunday Business.

"From the information gathered, I was able to set up my system and have it up and running in 2008."

The sight of the unusually large solar panels on his roof caused curious passers-by to begin enquiring about solar energy and discuss with him their own needs.

"I wanted to fully explore the technologies in the renewable- energy business, such as the tracking technology of photovoltaic panels," he said.

Hutchinson believed that renewable energy was a sector in the economy that "many persons are craving to learn more about and to use."

In late 2008, he set about creating Alternative Energy Plus, with funding from personal savings as well as a personal loan of J$2 million.

The company employs three persons, inclusive of Hutchinson, who oversee assets of, he said, about J$3.5 million.

Cash flow was one of the main problems at start-up, because the equipment was expensive, he recalls.

There was also the problem of getting the paperwork necessary for importing and securing the necessary waivers. Renewable- energy products are GCT exempt, but there are other costs, which are not.

And, while general costs have come down in some areas since 2008, in others they have gone up. Batteries have gone up in price but solar panels are now down five-10 per cent because of competition.

Locally, he surmises that only five per cent of the total Jamaican population is using solar.

"It's growing exponentially. It's not totally about green technology; it's also because of the savings."

Today, demand for his services is equally divided between companies and homeowners.

The photovoltaic panels are the bestsellers.

In 2009, the installation of photovoltaic systems was AEP's best line of revenue, while the maintenance of solar water heaters brought in the least income.

The primary costs in day-to-day operations include transportation and telephone charges, which Hutchinson states, are largely covered by revenue. In 2009, he noted, transportation costs increased as there was a continuous increase in fuel cost.

At today's prices, conversion to solar power will cost between J$800,000 and J$900,000 for a household using 150 kilowatts per month, depending on the type of equipment used.

Hutchinson said batteries may have to be replaced - depending on the quality of batteries used - in five to 15 years.

"It is not cheap, but is very feasible," he said.

"The cost of electricity is increasing by leaps and bounds. There is also inflation and the time value of money, which means that in a few years what was spent will appear cheap."

In 2010, Hutchinson expects to increase his client base to all 14 parishes by targeting more residential and commercial clients and doubling the number of installations done in 2009.