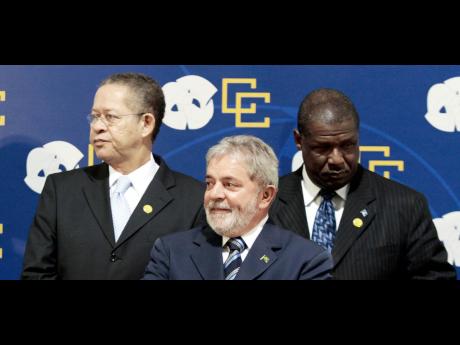 Prime Minister Bruce Golding (left) and Brazilian President Luiz Inacio Lula da Silva, get ready for the official photo of leaders at the inaugural Brazil-Caricom Summit at the Itamaraty Palace, in Brasilia, on April 26. - File

Should the Caribbean continue to see Europe as a viable long-term partner when its currency and economic integrity are coming under increasing threat, or are the dynamic new world economies of the south, like Brazil, China and India, likely to become over time, better partners than the old world?

Events in the last week in Europe and the growing interest being shown by Brazil and India in the Caribbean and Latin America shed some light on what may be happening and the long and far from easy road that lies ahead as the Caribbean seeks to diversify its relationships.

In Europe, both the economy of the eurozone and the United Kingdom, are in trouble.

In the week past, it has become clear that Greece, Ireland, Portugal, Spain and Britain are all facing long periods of austerity following years of profligacy and then having to spend huge sums to stave off an economic meltdown during the banking crisis of 2008-9.

In the case of Greece, the country is near collapse. Officials from the International Monetary Fund (IMF), the European Union (EU), and the European Central Bank are negotiating a three-year US$120 billion bailout package in an effort to prevent the debt crisis from bringing down other fragile EU economies. It follows the virtual failure of a US$60 billion plan that all but collapsed as the ratings agencies downgraded Greek debt and made further Greek borrowings unviable.

Speaking about the emergency measures, German Finance Minister Wolfgang Schaeuble made it clear that Europe had no alternative but to provide support to protect the euro.

"We have it to go this route," he said. "We are not defending Greece; we are defending the stability of our currency."

His remarks reflect a growing fear among Europe's stronger economies that Greece's problems will spread to other indebted eurozone countries. According to reports in the European media, one consequence could be eurozone states will have to provide US$650 billion to prop up other EU economies if it proved impossible to achieve a Greek bailout and calm market volatility.

In human terms, the remedy will be severe, involving the raising of sales taxes, increasing the retirement age by 14 years, and dramatic cuts in public-sector pay if Greece is to cut its deficit by 10 per cent in each of the next two years in order to return to the markets.

Achieving a rescue has been made more complicated as previous Greek governments misled the rest of Europe over the true state of its finances.

Just as alarming is the situation emerging in the United Kingdom where government has, for reasons of electoral advantage, delayed addressing the UK's massive deficit.

So severe are the likely solutions that the governor of the Bank of England is reported to have said in a private conversation that the austerity measures needed to address the UK's budget deficit would so damage whoever wins Britain's May 6 election that they would not get back into government for a generation.

What is clear is that whoever forms the next British Government will have to address immediately a budgetary crisis that will involve cutting public expenditure by at least US$24 billion by 2014 if the nation is to begin to halve a US$42 billion deficit. If it does not, it is likely that a sterling and bond crisis will ensue, possibly causing Britain to seek international support.

As in Greece, the British electorate is under no illusion what this means, as so far, no political figure has been prepared to spell this out for fear of losing the popular vote. Despite this, it is likely that the British public will not react well to austerity if as seems likely there will be, as in Greece, large-scale cuts in government, programmes, a swinging reduction in the numbers employed in the public sector, and a significant increase in taxation.

All of which stands in contrast to the positive performance of the economies of Brazil, India and China which, after slowing in 2008: are now growing rapidly again by on average around four per cent per annum, compared with a figure of 0.5 per cent per annum in the developed economies.

At a recent conference organised by the Confederation of Indian Industry, Jyotiraditya Scindia, India's minister of state for commerce and industry, said that Indian economic optimism should encourage business to diversify its reach and its export product portfolio by exploring the potential of the Latin America and Caribbean market.

Speaking last week in New Delhi, he said that within the Latin America and Caribbean region, the bulk of the Indian exports at present go to Brazil, and there was a need to broaden this.

He specifically proposed that Indian farm companies enter into joint ventures with enterprise in the hemisphere and consider mergers and acquisitions. He also indicated that the Indian hospitality chains ought to focus more on cooperation in tourism.

A similar message about the need for closer economic engagement came from the recent first Caricom-Brazil summit hosted in Brasilia by Brazilian President Lula da Silva.

Although the meeting only involved exchanges at a government-to-government level, it is expected to lead to trade delegations visiting in the near future to explore business opportunities. For example, Prime Minister Bruce Golding has said that Jamaica will be using a joint commission to look at cooperation in the areas of biofuels, oil and natural gas.

The contrast could not be greater between Europe's woes and the new opportunity offered by the nations of the South.

Cementing the relationship in practical terms through trade will take time and will not be easy: not least because of poor transport links and the region's reliance for a while longer on European preferential trade arrangements and developments assistance.

Notwithstanding, India, Brazil and China's growing interest in the region, well handled, is over time, likely to represent the future, and Europe the past.