What Greece can learn from Jamaica 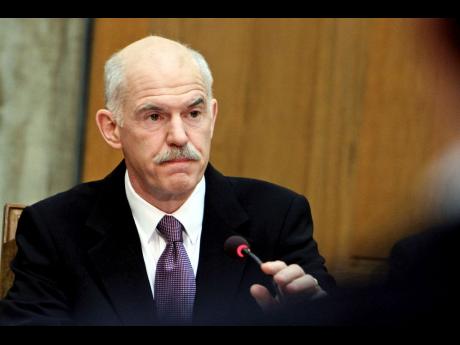 Greek Prime Minister George Papandreou seen here at a Cabinet meeting in the Greek Parliament in Athens on Friday, February 12.

A number of rating downgrades, coupled with a very unstable currency, added to the frustration of Jamaicans. The country needed a game-changing event since the often-adopted muddle-through option was no longer available or applicable to a very bad economic backdrop.

Taking the bull by the horns, the Jamaican economy took its first stride on its path to emerge from its fiscal woes. The game-changing event was for holders of locally issued Jamaican assets to agree to a coupon 'hair cut' and maturity extension of their bond holdings - the Jamaica Debt Exchange (JDX).

Stupid, you may say, or totally patriotic, depending on your perspective of the actions of the bond holders. However, investors realised that the solvency of the Jamaican state was at risk, and a bitter economic crisis was about to unfold.

In return, the Government promised to be fiscally prudent and not to spend our money in a way that would call on our children to shoulder the burden.

Of course, Jamaica's history of fiscal profligacy meant that investors take with a grain of salt what policymakers often have to say. To seal the deal, or to remove, technically speaking, the dynamic inconsistency problem, investors - including the International Monetary Fund (IMF) - asked for a binding commitment.

We really hope that binding commitment will come by way of a well-crafted fiscal responsibility law that can only be amended by a qualified majority in Parliament.

Why does Greece look so similar to Jamaica? Well, the simple answer is that a Herculean effort is needed in both countries to stem financial meltdown. In the case of Jamaica, some of that effort has been seen with the strength of the overwhelming support of the JDX by local investors.

Greece will need major action on the fiscal front to address solvency issues.

Even Greek Prime Minister George Papandreou would admit that his country has a credibility problem when it comes to past fiscal indiscretions. The European Union (EU) estimates that Greece's fiscal deficit finished last fiscal year at 13.6 per cent instead of the 12.9 per cent originally targeted, due mainly, we suspect, to rising interest cost on the debt and weak revenue flow.

The debt-to-GDP ratio for Greece is running above 100 per cent and it is scheduled to go even higher with the bulging fiscal deficit. The market, just like it did with Jamaica, has lost faith in the Greek government's ability to pull the country back from a financial disaster, hence, the SOS by the Greek Prime Minister to the EU and IMF for a package to stave off the "bond vigilantes".

So why can't the Greeks borrow their way out of the problem, or give more to the public-sector workers who are demonstrating in Athens? Well, you could ask the same question of Jamaica.

Why can't the Government pay public-sector workers more money, or spend more to stimulate the Jamaican economy? The simple answer is that there is no fiscal free lunch.

In other words, no one will lend you money to continue spending on recurrent - or any type of expenditure, for that matter - expenses when your solvency is in doubt.

In simple terms, no one wants to board a sinking ship. You may argue that the Jamaican Government could print the money to pay workers and everybody would be happy.

Truth is, the Government can only print money and be effective in spending that money if - and only if - holders of the currency allowed it.

The explanation for this is a bit technical, but it boils down to a higher rate of inflation.

In the case of Greece, of course, it cannot print more of the euro, since the currency is controlled by the European Central Bank.

Again you might say, surely all the government - Greek or Jamaican - has to do is promise investors that they will be repaid if they buy government bonds.

Well, no investor will believe your promise to pay once your debt level rises past 90 per cent and there is a credibility factor. There are many ways out of a sovereign solvency problem, and the government spending more money is not one. The Greeks will testify to this if you are still in doubt.

What do you have to do?

First, you need Hercules or some Herculean effort. Greece has close ties to the mythical Heracles and will understand quite easily the scale of the solution.

The JDX was part of the Jamaican Herculean effort. Reducing the fiscal deficit and bringing down the debt-to-GDP ratio in coming years are enormous challenges that Jamaica will face.

Greece, in coming years, will have to bring the debt-to-GDP ratio from 13 per cent to around 3.0 per cent as per the Maastricht Treaty.

I suspect Greece will have a huge challenge here since it cannot devalue the nominal exchange rate, as we have done in Jamaica.

In addition, there are signs that the real exchange rate in Greece is overvalued and will have to be brought under control via output loss. Given the demonstrations in Athens and what we know of the Jamaican Government's efforts to reduce public-sector spending, I wish Greece luck. Notwithstanding, the Greeks have the backing of the EU - the EU has very little choice given the huge risk - in reforming their economy.

Jamaica has started on the road to fiscal responsibility from what we can see in the 2010-11 Budget. For this fiscal year (2010-11), the Government has projected a J$88.4 billion reduction in aggregate spending (at J$503.9 billion).

Due wholly to the JDX, planned domestic interest costs and amortisation costs for the year have been slashed by J$46.5 billion and J$74.1 billion, respectively. In particular, domestic amortisation and interest payments collectively for this fiscal year were forecast at J$164.8 billion, noticeably lower than the J$289.3 billion for FY 2009-10, and underscores the future benefits to be garnered from the JDX.

Move in the right direction

Moreover, to tighten the fiscal purse further, the increase in expenditure on recurrent programmes and wages was kept at a minimum of 2.2 per cent (J$1.6 billion), and 0.8 per cent (J$1 billion), respectively.

While there are key risks to the Budget, such as inflation, natural disasters and a weaker-than-expected domestic economy, we believe there is a reasonable chance of the Government coming close to the targets.

The Budget deficit is targeted around J$80 billion, with some J$21 billion due to Air Jamaica divestment costs. Whether intended or not, if you add back the one-time cost due to Air Jamaica, you realise that for the first time in many years, the Jamaican Government is only borrowing to fund capital expenditure.

This is a move in the right direction and should augur well for a sustainable fiscal position over time.

However, like Greece, because the debt burden in Jamaica is so high, the Jamaican economy will be highly vulnerable to a variety of economic shocks going forward.