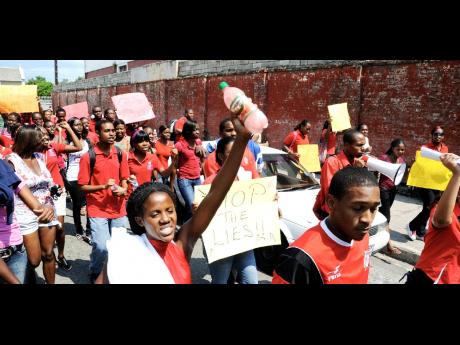 University students protesting on April 13 because of the reduction in the subsidies to tertiary level students. - Ricardo Makyn/Staff Photographer 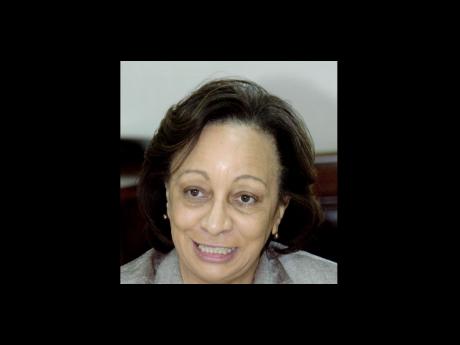 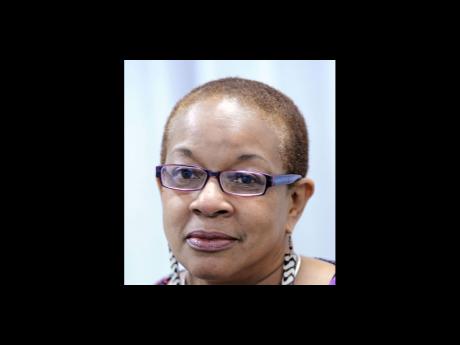 Finance Minister Audley Shaw proudly announced that the Government had allocated almost 15 per cent of the 2010-11 Budget to financing education. I won't question how he arrived at his ratios, but I notice that the United Nations Human Development Report for 2009 says that between 2000 and 2007, our spending on education did not exceed nine per cent of the budget. Suffice it to say that Barbados, which ranks 37 of 182 on the Human Development Index (HDI), allocated 16.4 per cent of its budget to education for the same period; only marginally less than Norway, the number one country on the HDI, which spent 16.7 per cent of its budget. (Jamaica is ranked at 100.)

Perhaps a miracle has occurred, which the minister of education will tell us about when it is his turn to speak in the sectoral debate. The overall allocation is not what is currently occupying my mind, however. It is the logic behind the allocation.

Perhaps this is not the best time to try to discuss this issue. I am sure some members of the government are wishing that the Jamaica Teachers' Association (JTA) and its members would just 'cease and settle'. As a teacher myself, I must sympathise with the JTA. I, too, would love to get the retroactive sums owed to me, since they are not even earning interest. There are also many improvements to the teaching and learning environment that I could recommend if ever the funds were made available.

Yet, even while I am distressed and somewhat offended by the Government's handling of this matter and entitlement behaviour of many tertiary-level students, I worry about that other group of students who are too tired and hungry to join the marches and demonstrations being organised by student guilds. Not many people realise how many university students are surviving on one nutritionally deficient meal a day (we may need to extend the school-feeding programme to tertiary-level institutions); who started their university education unclear about how they were going to pay the second semester's, much less three years, tuition fees. For these students, the knowledge that they are only paying 20 per cent of the cost of their tuition has little impact, since they cannot begin to imagine where the money to pay an increased percentage of their tuition fee would come from.

Not many people realise that although middle-class children still make up a significant portion of tertiary students, a great many children from the rural and urban working classes have gained access to higher education. For this group, the pursuit of a university education is something they do one day at a time. As educators, we sometimes have to remind ourselves that it may not be laziness or a lack of 'brought-upsy' that is causing the poor academic performance and the unacceptable behaviours we are encountering in the classroom. We have to consider that the irritability, aggression or sluggishness could be caused by poor nutrition, as well as a lack of sleep occasioned not by too much partying (although there is a lot of that), but by having to leave home at 5.30 a.m. to make an eight o'clock class. We also have to take into account the nature of the schooling (not education) received at the lower levels of the system, which, despite its many claims at transformation, seems to be achieving high rates of success in eliminating, or at least undermining, the spirit of creativity and the capacity for critical analysis among our children.

It is in this context that I have to examine the current opposition of university students to news that they will have to bear a larger portion of the cost of their education. This is the context in which I must receive the news of further deep cuts to the budget of my own institution. In the face of this I ask myself whether we will ever have a meaningful conversation about education, including a conversation about where we should concentrate our scarce resources.

What about early childhood education?

It is ironic that even as we declare the importance of what happens in the earliest years of a child's life, no one has questioned the existing model of financing early childhood education. Perhaps this is because the middle classes are not seriously affected by the model - their children are almost exclusively sent to fee-paying private preparatory schools. Once again, it is those of lesser means, not just economically, but also politically, who are most affected by the model.

The current dogma characterises early childhood institutions as being financed by "fees and non-governmental support" (Economic and Social Survey of Jamaica, 2009 Section 22.3). In other places, early childhood institutions, and specifically basic schools, are described as community institutions, established and run by private individuals. The Government's role is to ensure that standards are set and maintained. Schools that meet the standards are 'rewarded' with subsidies for nutrition and allocations to pay a teacher or two (contingent on having achieved the requisite size).

I must make it plain that I am not suggesting that the costs are completely equivalent. This is why we need to talk about equity, not equality.

There are several factors that must be taken into account. Obviously, it costs more to train a university teacher than a basic-school teacher, and to equip the institutions in which they work. But we have to think about the significance of the work done at the various levels and find some way of valuing and evaluating this contribution. We must consider who is most likely to be negatively affected by our failure to make an appropriate public investment in early childhood education.

A Planning Institute of Jamaica report of research done by University of the West Indies Professor Maureen Samms-Vaughan examines early childhood development in Jamaica. It contains some telling information about the relationship between the type of school attended and the academic achievement of the young child. In essence, it demonstrates that the children from the poorest homes have the lowest scores when it comes to academic achievement.

Before we blame parents for this outcome, we need to read the other findings that indicate that "poor parenting" is not necessarily or entirely the cause of this phenomenon. Rather, there are structural factors which must be taken into account. The developmental and educational psychologists will tell us about the long-term impact of deficiencies experienced at this level. I can attest to them when many of these children finally beat the odds and make it into the lecture rooms of tertiary institutions.

The Bernard van Leer Foundation, an organisation with a long and exemplary history of involvement in early childhood education, last year published a monograph which examines the assumptions underlying the dominant model of financing early childhood education. The writer, Peter Moss, calls this the market model in which early childhood services are treated like any other commodity (milk, cars, perfume) whose supply is conditioned by consumers (parents) who make rational decisions about where they will spend their money.

As Moss points out - and we all know - we human beings have never been very good at behaving like 'homo economicus'. Moss describes one of the alternatives to this model in which a process of dialogue and debate produces a design for early childhood services and determines the combination of public and private resources. This model is distinct from the one which obtains here in Jamaica for several reasons, not least among which is the fact that it is the result of including parents and children in its development. It is an approach which recognises that the state has a major responsibility for early childhood education, and that civil society, not the market, also plays a role.

"We - citizens of democratic societies - cannot escape responsibility for real choices that confront us in [early childhood education] (and elsewhere), by deferring to the invisible hand of the market or the truth claims of experts. There is no philosopher's stone that, once discovered, will magically solve the dilemmas of public services, freeing us from the responsibility, uncertainty and anxiety of making difficult judgements and attempting complex activities. The questions facing us, which will not go away, are, what shall we choose, and how shall we choose?" (Moss, 2009: 13).

Dr Peta-Anne Baker is the coordinator of the Social Work Programme at the University of the West Indies, Mona. She may be contacted at pab.ja2009@gmail.com, or send feedback to columns@gleanerjm.com.