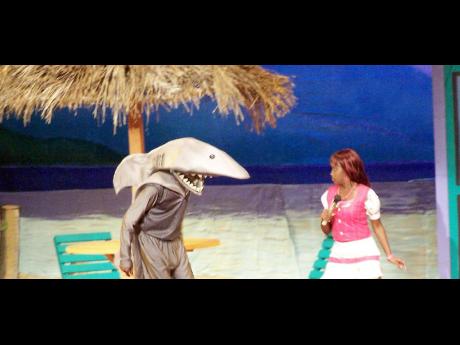 SHARK! SHARK! One of the most popular moments between Shark (George Howard) and Headline, the aspiring reporter (Kishawna Gordon) in the LTM National Pantomime 'Pirate Jack' which is nearing the end of its season at the Little Theatre. The final curtain goes down on Sunday, May 9. - Contributed

The LTM pantomime Pirate Jack is getting set for its 'las' lap' as the production ends next Sunday at the Little Theatre. The final show begins at 4:30 p.m.

"It has been a good run," said writer-producer Barbara Gloudon. "We really have to be thankful to our audience which, despite the economic and other difficulties of the time, have still come out from all across the island to enjoy the show."

Students from schools in every parish have made the journey to Tom Redcam Avenue, home of the Little Theatre. Many are regulars who attend each year. In many of these schools, students incorporate the experience into their studies by writing critiques of the show and essays on their experience of the trip to the theatre. Community and church groups are also among the regulars.

Their Excellencies, the Governor General Sir Patrick Allen and Lady Allen enjoyed the production, and a team of entertainment coordinators from the Sandals group, led by Weston Haughton and David Ellis, attended as a training exercise. They were facilitated to go backstage after the performance to discuss the creation of the sets, props and costumes, and to greet members of the cast and crew.

The Pantomime is one of the few places where an audience can hear a live band perform, accompanying the 22 members of the Pantomime Company as they act, sing and dance. The band is led by Calvin 'Bubbles' Cameron on trombone, playing music arranged by Grub Cooper.

This year's show-stopper songs include Keep Away from Jankro Bay, performed by George Howard as Shark, the most popular character in the story.

Other favourites from the repertoire of songs created by Cooper, with lyrics by Gloudon, are the inspirational Nah Gi'e Up, the Actor Boy-nominated Life of a Fish and the peppy finale number, Good to Go.