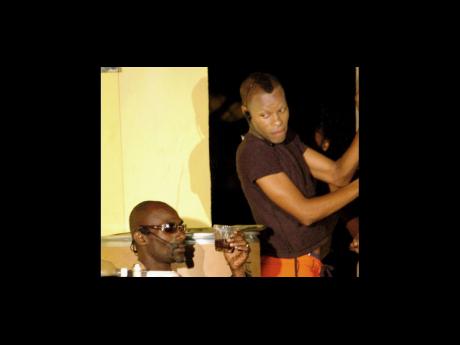 Garfield Reid (left) and Keith 'Shebada' Ramsay in a scene from the play 'Bashment Granny'. 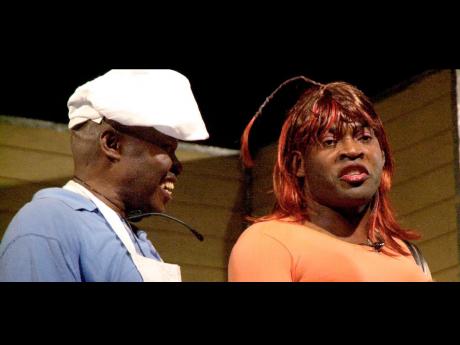 Costuming is one of the exaggerations used in roots theatre, as illustrated by this scene in 'More Passa Passa'. - File
1
2

There is generally a negative connotation attached to the term 'roots play', but it seems many actors who are known more for their roles in traditional theatre are heading in that direction.

In days gone by, roots plays were often scoffed at. Many plays, such as Unda Mi Nose, Maama Man, Secret Lover, Man Fi Get Bun I and II, Dead Lef, Old Hen Young Rooster and Wickedest Slam were viewed as undesirable.

However, Andrea Wright, who plays Delcita in Money Worries and The Plumber, views the term roots play as offensive.

"If you call it roots play, we tend to get upset. We identify with so many people. I am able to deliver to the entire segments of the market. So, where Delcita exists, there is no divide," she said.

Although she does not like the term, Wright said more people have been venturing into this form of theatre.

"There is a big crossover. The crossover is so heavy that the line of demarcation is almost erased because people realise what is happening. It boils down to strategic marketing. What is happening now is Shebada, Delcita and Oliver are the top guns in comedy. The market is not buying any shows that don't have these people," Wright told The Sunday Gleaner.

While he started out in traditional theatre doing productions with the University Players, Sheldon Shepherd said it has not been a big change for him.

"It wasn't really a switch," said the actor, who has appeared in plays such as Money Worries and The Xtortionistz.

"I wanted to experience it as an actor and add it to my résumé and it was a great experience. I love them both (roots and traditional plays) and they serve their purposes. I appreciate them for what they are. It (roots plays) is sometimes snubbed for its approach. I have been in environments where some people say, 'I will never do that.'"

While he wanted to experience something different, Shepherd said it was possible that there were others who had made the switch for monetary gains.

"There is a thing going on that the money is better. It is consistency and they have more shows. So it adds up over time," he said, noting that these plays generally have large audiences.

Having worked on both types of productions, Michael Nicholson said he prefers to refer to them as Jamaican theatre.

"This term roots play was coined by uptown people who didn't understand Jamaican theatre. But they are all commercial entities. They are all out there grabbing audiences," said Nicholson who majored in directing at the Edna Manley College of the Visual and Performing Arts.

Nicholson said he has 11 Pantomimes to his name and he has directed plays such as Serious Business and Bashment Granny 2, which are referred to as roots plays. He has also done work on other productions, like Jamaica To Rahtid, Pupalick, Concubine and Me And Mi Chapsie.

With all of the plays, Nicholson said the production process had been the same.

"I am working. I am not switching. I am doing theatre. As far as I am concerned, I bring my skills to the table and it's no different. I have never frowned on roots plays. We have been fusing skills together 'cause at the end of the day, we just want the people to get a better product," he said.