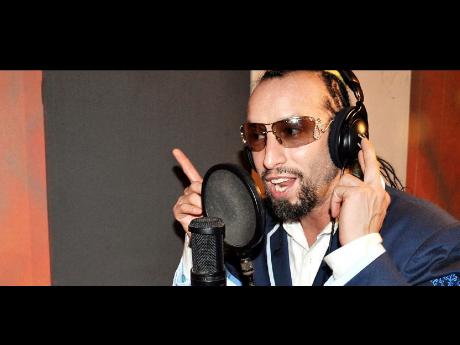 Ever since he heard the first beat of a reggae song in the late 1980s, American-based reggae artiste Benny Bwoy said he immediately fell in love with Jamaican music.

But it never stopped there for the sprightly Jewish singer, born Behn Goldis in Far Rockaway, New York, as he transferred that musical affection into an art form he now lives for.

"I've been coming here (Jamaica) for a long time and I have been in the mix since the late 1980s. The first reggae song I heard was a Papa San and that was where my love for music began," recalled Benny Bwoy in a recent interview.

When The Sunday Gleaner caught up with the self-proclaimed 'Jewmaican', he was voicing several singles at Braeton Connections record label, based in Portmore, St Catherine, but took time out to talk about himself and his love for Jamaican music and how he's planning to introduce himself to the local market.

Benny Bwoy was raised in an Orthodox Jewish home but lived in a multi-culture neighbourhood in Far Rockaway. The different ethnicities introduced him to various forms of secular music and before he knew it, music infused his everyday life.

"Yeah man, music is my only focus. I started with rapping but it got too violent. In the '80s rap turned gangster so it was a natural transition into reggae music," he said.

In Europe, Benny Bwoy became popular with his influential music and liberal philosophy. Though still on his way to musical stardom, he has performed at venues in United States, Europe, the Middle East and Asia.

Benny Bwoy was a member of the internationally known group, The Lost Trybe of Hip Hop, best known for its two charted Billboard singles Masta Plan and Pressure. He is also a member of the Screen Actors Guild in the USA and wrote and starred in the musical Hip Hop in the Promise Land, which was produced and aired by Comedy Central.

Benny Bwoy is currently promoting three singles - Rise Up, Too Much Problem and God We Love. He believes the public will find the messages of the songs interesting as they speak of everyday happenings.

"It's easy listening. I've things with a message and it allows people to think about it. The beat is good but if you look into what's said, you'll see the difference," said the singer, who is also promoting the single Follow Mi Name, which he recorded in New York.

Benny Bwoy is also the founder of an organisation called Musical Alliance for Racial and Cultural Harmony (MARCH), which was started in the early 1990s after the Crown Heights riots in Brooklyn, New York.

Even though he has been visiting the island back-and-forth for the last two decades, Benny Bwoy said he's still adjusting to Jamaican culture. He also said because of his appearance persons are normally amazed whenever he opens his mouth to sing.

"They can't believe it. People tell me if they close their eyes and hear me they wouldn't dare to imagine the character because of my Jewish look," he said. "I'm very confident around people, don't care who they be," he added.

Benny Bwoy has a passion that is so strong that he has been embraced by a culture and heritage that he was not born into. It is that passion and love that allows Benny Bwoy to rise up with the hope of making a difference in society.

"I don't perform. I entertain. I want people to go crazy whenever I'm onstage. When it's all said and done on my career, I'll be that difference-maker," he said.