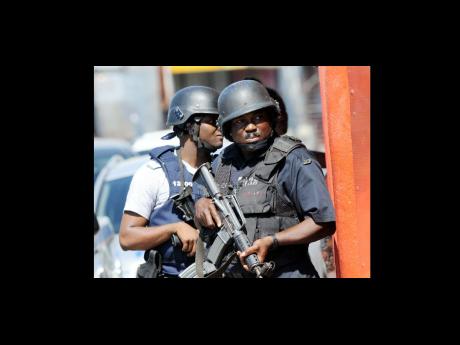 Police on patrol in a section of Kingston. 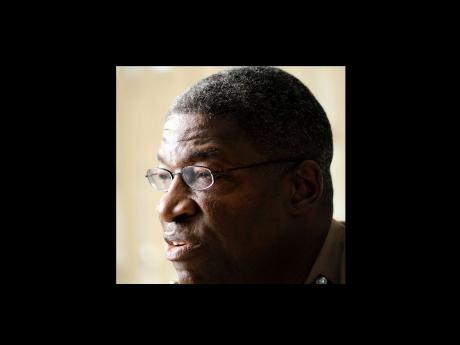 In the fight against crime, the police are bawling out for help. Let us help them.

On the day that the murder toll published by The Gleaner on its front page stood at 495 [April 22] the lead story was 'Help us - acting commissioner calls on the public to aid crime fight'. The then acting commissioner had just released a 16-point crime-reduction plan, another in the lengthening series of crime-fighting plans.

"In order for these policing activities to work and to ensure the safety and security of all Jamaicans," Ellington warned, "it is important that citizens continue to support the police by sharing information about criminal activities, even where those involved are related to them." If this is what the new 16-point plan is going to depend on in a culture of silence reinforced by terrorist violence, it is destined to join the long list of other failed plans.

The then acting commissioner went on to say in his call for support, "It is also crucial that all Jamaicans obey the laws of the land and resist temptations to take part in any illegal activities which offer financial or other benefits."

On the day that Ellington was reported to have ceased his three-month acting and was to be confirmed as commissioner of police [April 23], The Gleaner's published murder toll stood at 500. Ellington, The Gleaner reminded us, has listed crime reduction, with special emphasis on murder, as his top priority as commissioner. The published murder stats are not very encouraging. And the paper has taken quite a bit of flak for screaming how many have been killed as the days of the year tick away.

The usual complaints of needless sensationalism and putting the country in a bad light overseas which will hurt tourism and investment, have surfaced. For what it is worth a vox pop poll conducted by Newstalk93FM in its afternoon 'Pon di Corner' show had 23 persons supporting the daily publication of the murder toll against 14 not in favour. That is 62 per cent "yes" to 38 per cent "no".

Considering the audience for 'Pon di Corner', these views are from persons among the most vulnerable to be murdered. Unfortunately, none of the 520 murder victims killed this year, up to the date of the poll [April 26], or the 1,680 killed last year, or the thousands killed since murder spiked with armed political tribalism in the 1960s, can be polled for their views. And this year's toll is relentlessly rising. Let us help the police.

While citizens have a vital role to play in helping the police to police effectively, government has a critical role which cannot be transferred to civil society. The core functions of any state and its government are to provide security to its citizens in life and property, dispense justice, and build and maintain public infrastructure which private enterprise can't or won't. If the basics are not right, nothing else will prosper in the long run. In these core areas the Jamaican state and its Government has been a miserable failure.

The Opposition, formed by a political party fresh out of the longest stint in government, has greeted the appointment of Owen Ellington as commissioner of police with a call urging the current administration to provide the new commissioner with the support he needs to be successful in the job. "While our (the Opposition) support is important, the critical support must come from the policy action the Government takes in areas not limited to national security, but in areas that support policing," the Opposition spokesperson on national security, Peter Bunting told The Gleaner.

The Government of Jamaica and its police force are fighting one of the worst hard-crime problems in the world with grossly inadequate numbers. Minister of National Security Senator Dwight Nelson, in an interview with Gary Spaulding for The Sunday Gleaner, estimated that it will take no fewer than 15,000 police officers to effectively carry out the crime-fighting measures being pursued by the operational arm of national security. And what have we got? Only 8,500 members of the JCF, plus another 2,000 members of the ISCF - 10,500 mainstream officers, backed up by 2,000 district constables.

Minister Nelson is publicly admitting that his proposal to establish a police reserve force to beef up crime-fighting has been affected by 'budgetary constraints'. Are we mad? Shouldn't the Government of Jamaica be charged with gross dereliction of duty, if not treason? Some 80 per cent of murders are gang-related and occur in the garrisons and in only five of the 14 parishes: Kingston, St. Andrew, St. Catherine, Clarendon, and St. James, with Westmoreland coming up. If these murders could be cut this year by targeted action by 50 per cent, which is possible, some 700 lives could be saved.

Points of the latest worthy-on-paper crime-reduction plan include:

High-visibility uniformed patrols and presence in communities and commercial areas to provide reassurance to citizens while deterring criminal activities.

Covert patrols and presence to take advantage of the element of surprise in apprehending criminals with evidence.

Security and stability operations in crime hotspots to reduce incidence of criminal violence, arson and intimidation.

The expansion of intelligence input to investigative and operational policing to achieve greater focus on critical crime targets such as gangs, trafficking syndicates, groups at risk and crime hotspots.

A programme of nationally driven strategies to confront major crime challenges which transcend division boundaries and, in some cases, national borders.

Commissioner Ellington and Minister Nelson know very well they are only fooling themselves - and attempting to fool us - with this plan, while seeking to postpone their relegation to the expanding scrap heap of failure reserved for police chiefs and ministers of national security. The necessary resource support is not there. We citizens are fooling ourselves that our Government can spend on every conceivable budget line and still find enough for mounting an adequate anti-crime response under our record-setting crime conditions.

Crime reduction calls for big, bold, radical action. Towards this end, as a citizen, I am calling for a doubling of the strength of the JCF, and a doubling of budgetary allocations to the security and justice sectors of Government over the next 24-36 months. Increase salaries by at least 50 per cent. Attract the brightest and the best into the force. Attract private-practice lawyers into the judiciary. Prime Minister Golding in his Budget Debate presentation has quite correctly identified the delivery of justice as part of the crime-fighting strategy. Except that he is not prepared to do very much about either justice or security, judged by the tameness of his proposals.

Where is the money to come from? It must be sliced off other budget lines. No murder victim, could they be polled, would disagree with this. So let us begin. Any recommended sectoral cuts are bound to anger those sectors which have laboured so hard to secure their piece of the budget pie. But a core duty of the state and its government is to secure the lives and property of citizens and to protect the enjoyment of our rights and freedoms.

Cut the allocation to tourism. Let profit-making private enterprise do their own marketing. Use Tourism Enhancement Fund money to run the scaled-down core functions of the ministry, even if legislative changes must be made to allow this. By the same reasoning, use some of the mountain of money in the Nationala Housing Trust to run the Ministry of Housing and Water, and, in general, use controlled portions of special funds to finance the ministries which supervise them. The laws establishing these funds did not come down from Mount Sinai and can be adjusted.

The police want to offer greater security to students. A point of action is "Expansion of the School Safety Programme to reduce school violence, drug abuse and the influence of criminal gangs on school communities." Transfer five per cent of the education budget, the biggest sectoral budget, to crime fighting while expanding loan financing of tertiary education through pumping some HEART Trust money into the Student Loan Bureau.

Trim Culture, Youth and Sports. Let private enterprise pick up the slack. And pump the money into highly targeted programmes to keep poor young men "pon di corner" out of crime, or to rehabilitate them out of crime.

If it can't be done, tell me why. If it can be done, do it. This country is bleeding to death. And the blood of the slain is gumming up all hope of real progress towards Vision 2030: 'Jamaica, the place of choice to live, work and raise families'.