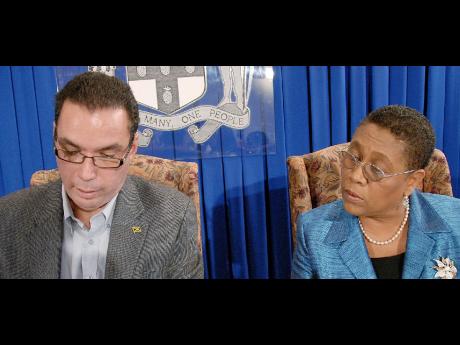 After I had read the recent statement coming from Minister Karl Samuda concerning the Bradygate issue, so-called, the first memory that came to mind was the story I learnt at Sunday school about Ananias and Sapphira, recorded in the Acts of the Apostles. Since it is not a story that is now as well known as during my time at Sunday school, let the King James Version of the Bible tell the miserable tale.

"And the multitude of them that believed were of one heart and of one soul: neither said any of them that (any) of the things which he possessed was his own; but they had all things in common. Neither was there any among them that lacked: for as many as were possessors of lands and houses sold them, and brought the prices of the things that were sold, and laid them down at the apostles' feet and distribution was made unto every man according as he had need.

"And Joses, who by the apostles was named Barnabbas, having land, sold it, and brought the money and laid it at the apostles' feet. But a certain man named Ananias, with wife Sapphira, sold a possession and kept back a part of the price, his wife also being privy to it, and brought a certain part and laid it at the apostles' feet. But Peter said, Ananias, why hath Satan filled thine heart to lie to the Holy Ghost, and to keep back part of the price of the land? Why hast thou conceived this thing in thine heart? Thou hast not lied unto men, but unto God.

"And Ananias hearing these words fell down, and gave up the ghost: and great fear came upon all of them that heard these things. And the young men arose, wound him up and carried him out and buried him. And it was about the space of three hours after, when his wife, not knowing what was done, came in. And Peter (asked of) her: Tell me whether ye sold the land for so much? And she said, for so much.

"Then Peter said unto her, How is it that ye have agreed together to tempt the Spirit of the Lord? Behold the feet of them which have buried thy husband are at the door, and shall carry thee out. Then she fell straightway at his feet and yielded up the ghost: and the young men came in, found her dead and, carrying her forth, buried her by her husband. And great fear came upon all the church, and upon as many as heard these things."

The fact that persons within the Jamaica Labour Party and the Government "have agreed together" to try to pull the wool over the eyes of all Jamaicans, at home and abroad, is not likely to cause the participants to "fall down and give up the ghost". Yet, the basic sin, that of hiding the truth, which led to the demise of the biblical figures, is clearly present in the convoluted yarn that the authorities have sought to spin before the eyes of the people.

Consider this! The people are entitled to expect that the country's minister of information, whose word in reporting on matters relating to any aspect of governance should be able to withstand the closest scrutiny, will answer any challenge to any of his public pronouncements Well, not so in Jamaica.

The minister of information speaks directly to the public on a captivating current issue. A political party colleague of his, a private citizen and attorney-at-law, tells the public directly that, knowing what they both know, the minister, in speaking as he did, must either be daft or he needs to have his head examined. In essence, that challenge of the private citizen to the minister is in no way different from the manner in which Peter confronted Ananias and his wife. And, it betrays an inextricable link between government and political party in the entire affair.

Several weeks later, the minister has not plucked up the courage to answer the challenge of his political party colleague. It is recorded that ministers of information have stepped aside for failing to report to their colleagues faithfully. For the ruling administration in the case of a minister of information who has been accused of being less than candid to the people, their employers, "a nuh nutten". A "great fear" must have come "upon as many as heard these things".

And, surely, Minister Samuda could not have expected that this past week's statement which was issued over his name meets the challenge of the private citizen. For the main thrust of the challenged statement of the minister of information was that there was no government link to the issue that he was addressing. Minister Samuda's statement says otherwise, and a reference to "a brief social encounter" in Washington, DC, between a member of the government, a minister in the ministry of foreign affairs, no less, and a representative of Manatt, Phelps and Phillips also marks a crossing of the line between government and party activity.

Or, is it to be regarded as another happenstance meeting as the plane ride that was shared by some private citizen from the very same overseas law firm and the solicitor general, according to the prime minister and JLP (Jamaica Labour Party) leader at one juncture in the sordid saga, and which was later to be knocked out of the water by the solicitor general himself who admitted to having been in constant dialogue with the private attorney ever since the extradition request had been made, and knew of the pending trip to Washington, DC?

Well, this brief social encounter, according to Minister Samuda, took place after the foreign affairs junior minister had refused an invitation from the private citizen to attend a meeting at the US state department. Imagine, a private citizen inviting the minister to such a meeting and not the other way round. Who, then, is in charge? Is that believable without more, Minister Samuda? Most people see it as abject obfuscation.

Stranger to the treaty dispute

According to the Samuda statement, from as early as September last year, persons within the JLP approached the private attorney, their colleague, to seek to resolve what had become a treaty dispute between the US and Jamaica. Now, that treaty dispute was, and is, a matter between the Government of the USA and the Government of Jamaica. No 'resolution' could be attempted by any other entity without the authority of one of the parties to the dispute. The JLP was, and is, a stranger to the treaty dispute.

Nevertheless, says Minister Samuda, the private attorney and party colleague entered upon the reference, and the services of Manatt were engaged in early October. But, that engagement was documented as the private attorney being a consultant, not to the JLP, which would not have been acceptable, but to the Government of Jamaica. The private citizen, and attorney, maintains that that was a mistake. Perhaps Minister Samuda can explain how such a "mistake" could have been made, in light of the "approach" having been made by "persons within the JLP".

The foreign affairs junior minister knew of the involvement of Manatt, according to the Samuda statement, certainly since November. The solicitor general, who claims to have been in constant dialogue with the private attorney, met with Manatt representatives in December and had one of them with him in a meeting with the US government representatives. Jamaica's minister of justice stands in the centre of the "treaty dispute between the US and Jamaica".

Now, the minister of justice, who is also in the JLP hierarchy, would have us believe that, with all that has taken place since September last year when persons within the JLP approached the private attorney; the signing of a contract with US attorneys, whether on behalf of the Government or persons within the JLP; a minister of government and the solicitor general having met with the attorneys; between all the government and party meetings, inevitable discourse within the corridors and whisperings in the margins; social and celebratory gatherings; and in-depth pow-wows concerning this delicate matter, the first time that the minister heard the name Manatt, Phelps and Phillips was when Dr Phillips mentioned the name in Gordon House, in March of this year.

Perhaps we should ask the private attorney and political party colleague to comment on that assertion and the expectation, by the minister, of being believed. The view in a multitude of quarters is that it would be difficult for him to improve upon the challenge that he threw out to the minister of information weeks ago, to which no reply has been forthcoming.

I have long warned this administration of the blurring of the lines between government initiatives and requirements, and political party urgings. I continue to maintain, as I have written before, that this approach has perhaps sprung from a view held by the National Democratic Movement, which was founded by the present leader of government, that the United States system of government is best suited for Jamaica.

As it has turned out, since that is not likely to receive much traction in traditional JLP thinking, the next best thing has been to attempt to engraft some of its elements on to our system of governance. We have witnessed the upheaval that this has caused in almost every government ministry, department and agency, beginning, as it did, in the attorney general's Chambers. And a "great fear" has come upon all who have heard these things.

A. J. Nicholson is Opposition spokesman on justice. Feedback may be sent to columns@gleanerjm.com.