Wanted! Detectives for the JCF 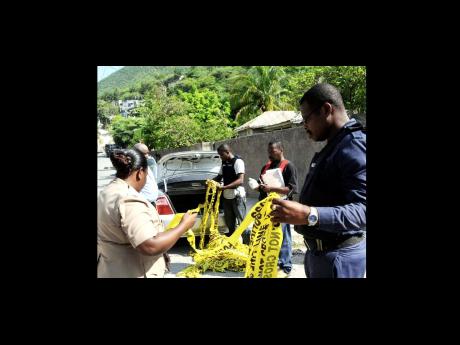 The police have failed to solve more than 6,000 of the murders committed within the last six years and indications are that most of the killings that will be committed for the rest of the year will also remain unsolved.

The major sticking point: the Jamaica Constabulary Force (JCF) just does not have enough detectives to assign to the cases to ensure that the perpetrators are caught.

Assistant Commissioner of Police (ACP) Les Green, who heads the Major Investigation Task Force (MIT), and the Criminal Investigation Bureau (CIB), told The Sunday Gleaner that the police force needs many more than the 816 detectives now on the ground.

At present, the force needs more than 430 additional detectives to get its current complement up to an acceptable international standard.

The 816 detectives currently on the JCF roster represent 10 per cent of the force's 8,350 membership.

"The force has suffered a shortage of detectives for a long time now," Green said.

"It did not help that no detective training or appointments took place between 2004 and 2009," added Green in a written response to questions from The Sunday Gleaner.

Green reported that over the last six years, the JCF recorded an average clear-up rate of 38 per cent of the murders committed across the island.

With official figures showing 9,366 murders over that period, this would translate to a little more than 3,550 cases cleared up.

However, the clear-up rate does not translate to arrest and conviction, as the police also list a case as cleared up when the suspected murderer has been killed.

"Over the last six years, the murder conviction rate has been five per cent, with only an average of 75 persons being convicted of murder or manslaughter islandwide.

"This is from an average of 668 persons charged with these offences over the same period," Green said.

He continued: "Some of the reasons relate to the delays in the criminal-justice system, poor preparation, witness intimidation, and that it takes an average of five years for a murder trial to be held."

Green also claimed that there were more than 120 murder cases ready for trial but only an average of 50 cases would be heard in a year.

"So we have a very serious problem with bringing murderers to justice, and this is just building in longer delays."

According to Green, the JCF is moving to address the shortage of detectives by implementing a new programme to deliver training at three levels: basic skills for all investigators, and basic and general CIB courses for all detectives.

The force has also introduced a programme designed for advanced supervisory staff.

"We did implement a cold-case review, team, although pressures of current investigations and workloads have now forced us to close that unit down and merge the limited staff with the KSA (Kingston and St Andrew) MIT," Green said.

The police's inability to catch criminals and the failure of the State to quickly ensure their trial, have long been identified as among the reasons for Jamaica's high crime rate. And the shortage of detectives provides more cause for concern.

Executive Director of Jamaicans for Justice (JFJ), Dr Carolyn Gomes, who has been at the forefront of calls for high-quality investigation into fatal incidents, was surprised when told that the JCF had not trained or appointed any detectives between 2004 and 2009.

"That's ridiculous! I can't even find the proper words to put to that. That's unbelievable!" Gomes told The Sunday Gleaner.

An impassioned Gomes argued that criminals in Jamaica were getting away with murder - literally.

"People can almost be guaranteed that you can get away with murder. The situation we are in points to an urgent need for leadership, police reform, justice-system reform, and community inter-vention," Gomes said.

She argued that the hostile relationship between the police and the residents of most communities, compounded by the force's lack of forensic capability, and the "informer fi dead culture", added to the massive problem being faced by the nation.

According to Gomes, the time has come for Jamaica to accept that the JCF is a failed force.

"Can we now accept that the JCF is failing in its mandate and the time has come for us to have, urgently, a new, reformed police service for Jamaica, cleaned up and empowered, with decent accountability systems, enabled to begin afresh?"