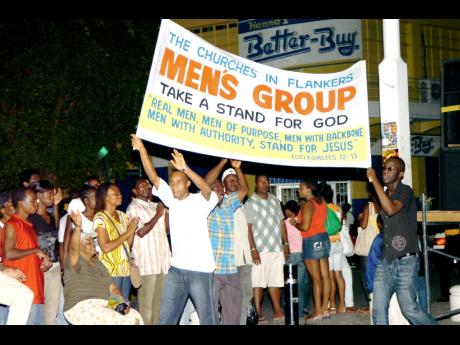 Church members parade with a banner in Sam Sharpe Square, Montego Bay, during a men's rally in June last year. The rally, led by Errol Rattray, was held under the theme 'Real Man, Come Take A Stand'. The tourist capital is currently being rocked by crime committed mostly by young men. - Photo by Noel Thompson

WHILE THE Church has a mandate to be fishers of men, Jamaica's youth - particularly young men - on the fringes of society are not biting the fellowship bait.

Not many young men, especially those from the troubled 18-25 age group, are attracted to religious-themed gatherings.

The Reverend Dr Lloyd Maxwell, senior pastor of Agape Christian Fellowship, Cedar Grove Estate in Portmore, St Catherine, told our news team that the church is having difficulty pulling youngsters into its men's fellowship. Maxwell said that his church had even designed a plan to get to young boys before the gangs did.

The programme, Taking Opportunities Provided Seriously (TOPS), targets boys between the ages of six and 15.

There are about 20 young boys now in the programme, which meets on a Saturday. While the TOPS programme has an academic focus, the church also seeks to impart social skills.

Maxwell believes many of the men in the older age groups have already gone through the gate. "We feel our resources are better employed among that age cohort, because they have not crossed the Rubicon," said Maxwell.

The youth ministry, however, which meets once per week, is better supported by young men between the ages of 15 and 25. "It's a street ministry and the response is very good," he said.

Over in two of Kingston's tough inner-city communities, David Chang serves as pastor of Majesty Transformation Fellowship, which has branches on Payne Avenue and Majesty Gardens.

Despite the hundreds of men seen on street corners in these communities, not many hang out with the church.

Chang, who was once affiliated with the Covenant Community Church, said during that time, about eight or nine men consistently supported the men's fellowship meetings. "It's not a lot," the pastor admitted. "But we are working on others," he added.

Chang believes it takes cash to care, especially for the men. "The men want something, like jobs (and) assistance to start a business. You have to have money to deal with men."

He pointed out that the church on Payne Avenue has only one male member and 25 female members.

Chang's church does not currently have a men's group. "Most of the men are in missions overseas, so we don't have a strong men's group right now. Mostly women at the church right now, and the men are young in the faith," he said.

While many men will not be found at Majesty Transformation Fellowship, the pastor said about four young men in the age group 15 to 25 are members of his congregation.