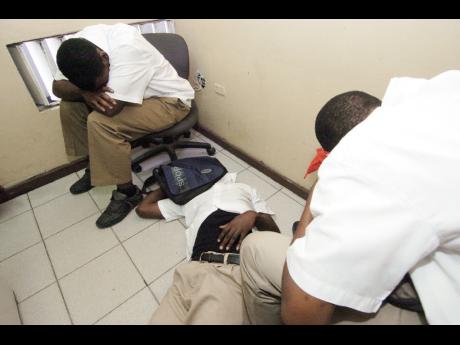 Three of the six boys from a St Catherine high school accused of stealing a cellphone, who were beaten by men from a De La Vega City community, wait in the guardroom of the Spanish Town police station. Statistics show that high numbers of crimes committed recently are done by teenage boys.- File

AMONG THOSE killed recently in the relentlessly rising murder toll were the five young men executed in the tough and gritty, poor Salt Spring community in Montego Bay, St James.

One beheaded, three burnt to cinders, as the house in which they met their end was torched.

They have names, families, perhaps including infant children, schools from which they graduated, and ambitions. Now they have no future.

The killers, travelling in a 'massive' of more than 12, were other young men.

They, too, are destined to die before age 30 from reprisal attacks, at the hands of the police, or by cronies turned enemies.

The Salt Spring dead have attracted and held strong public attention in one of those inexplicable uprisings of public outrage.

Otherwise, they would be nameless, faceless statistics in the bloody parade of murdered male youth who now number in the tens of thousands from the 1960s when guns, gangs and garrisons began converting sections of the country into killing fields.

The murder of young men by young men from a certain stratum of society has been virtually normalised.

Outrage is reserved for women, children, the aged, and those of the higher stratum of society.

Murder is just the most horrible and final manifestation of the 'male problem' facing Jamaica.

From birth, the odds in some critical factors are stacked against the 'bwoy pickney'. Males start out with a lower life expectancy than females.

The treatment of the boy child in the typical Jamaican family is generally harsher, but with less disciplinary control. The vast majority of street children are boys.

While the female-headed household is sentimentally held up as a measure of the resilience and strength of the Jamaican woman, the absence of fathers is having a profound negative impact on the formation of the male character.

Many Jamaican children have no father identified on their registration of birth. Sociologists, like the American David Popenoe, have done extensive work identifying the critical role played by fathers in the holistic development of children, particularly boys who specially need male models.

From the first day of basic school, the system starts to weed out boys. Privileges at home continues at school.

Boys disproportionately drop out of the school system. And at every stage perform less than girls.

At the primary level, boys are getting lower scores in the Grade Four Literacy Test and the Grade Six Achievement Test. There are more illiterate men than women.

At the secondary level, fewer boys survive to the terminal examinations, and when they do, overall, they are out performed by the girls. Tertiary education is dominated by women; the female:male ratio is now as high as 86:14 at the University of the West Indies (UWI).

In his book Life Without Father, Popenoe, a professor of sociology at Rutgers, mobilised statistics which show that

60 per cent of America's rapists came from fatherless homes

72 per cent of adolescent murderers grew up without a father

70 per cent of long-term prison inmates are fatherless.

In recent news, a schoolboy was implicated in the accidental shooting death of a 23-year-old man with an illegal firearm.

Apparently, the boy was being inducted into the use of the weapon by his mentor when things went awry. Nothing unusual about the induction, which would have gone completely unnoticed except for the accidental shooting death.

Dr Herbert Gayle, UWI anthropologist who is studying social violence, has done extensive work on how young boys are socialised into a life of crime, which for many, is a preferred option.

And Minister of Education Andrew Holness has been making the point that illiteracy, which makes it impossible to learn effectively in school, is frustrating many boys into alternative pathways.

It is now fashionable to talk about unattached youth, young people who are not in school, not at work, not in church, not in identifiable social organisations. The majority are males.

Jamaica definitely faces a male crisis, which is severely affecting men themselves, their families (women and children), and the country at large.

While the crisis may not be as all- encompassing as the popular view of 'male marginalisation' would suggest, it is nonetheless very serious.

Men do better at 'hustling' and in several areas of small-business operations. And, of course, successful men dominate managerial and leadership roles. It is also true, as Professor Barry Chevannes never tires to point out, that male parenting is not exactly absent, although perhaps at less-than-desirable levels.

But it is the male engagement with the criminal enterprise which is of greatest concern to the country, both for the sake of men themselves, and for the country.

The normalisation of violence is deeply worrying. Masculinity has become strongly linked to 'bussing shot', both symbolically and literally.

Men must be rescued. And those who know the problem best, believe, and have argued, that a comprehensive national programme is required for this.

The key elements of a workable rescue programme for men are very well known. Gayle and others have confirmed what common sense suggests, that nurtured boys are less likely to fall into gangs. We must increase the nurturing of the bwoy pickney. Since dysfunctional families are not able to get the job done, the school and community social intervention must do it. At the same time, the power and prestige of the gang must be curbed.