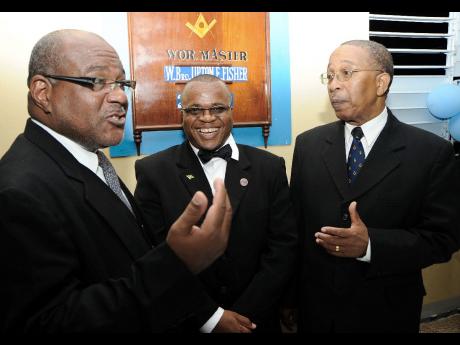 Walter Scott (left), district grandmaster, and Fed Cuthbert (right), immediate past master, in discussion with Worshipful Master Upton Fisher after his installation as Worshipful Master for the St Thomas Masonic Lodge at the Masonic building in Morant Bay on Saturday, December 12, 2009. - Rudolph Brown/Photographer

For years, many Jamaicans have viewed Lodges and Freemasons as mysterious organisations shrouded in secrecy, with its members the subject of fear and suspicion.

But behind the closed doors of the local Lodge movement, are men from various vocations - educators, musicians, clergymen, businessmen, lawyers, doctors, politicians, and even a former prime minister.

Because little is known about these activities, the Lodge movement has been accused of being an elitist group interested only in the welfare of its members while ignoring the many social problems affecting the country.

But Lloyd Moore, grandmaster of the District Grand Lodge of Jamaica, says the elitist label is a misconception that many have discovered once they find out about the operation of the local Lodges.

"Some people join believing that they're joining an elitist group that does not care about what's happening around them, which isn't true," Moore told The Sunday Gleaner.

According to Moore, the Lodge movement is gravely concerned about the increasing level of crime plaguing the society.

He said his Lodge, which is affiliated with the Freemasonry Lodge of Scotland, is also concerned about the future of young men from Jamaica's inner-city communities.

"In the ghetto, 70 per cent of boys have absolutely no chance of making it unless someone can steer them out of it. Only 30 per cent will do it on their own," Moore said.

"We have to be more involved in the development of our youth, especially our young boys," added Moore.

"Every successful man in Jamaica should be involved with the deve-lopment of our youth. Every one of us must care for what is happening to them. I don't see any other way."

Moore disclosed that his organisation ran a mentorship programme called Men Who Care, which encourages self-sufficiency.

Under the programme, Lodge members trained in mentorship work with schools where young men are placed in their care.

This is designed to improve the values and attitudes of the young men while providing them with assistance through training.

"One of the problems we have really is that a lot of young men are not really idle because they want to be. They are so because the country has not created adequate training opportunities for them," Moore opined.

A programme implemented by a member of the Lodge movement gave five boys from a depressed community Grade Six Achievement Test scholarships and mentorship during their five years of high school.

The five boys each passed more than seven Caribbean Secondary Education Certificate subjects and continue to receive support from the Lodge now that they are in sixth form preparing for the Caribbean Advanced Proficiency Examination.

Another prominent branch of the lodge movement, the Mechanics Order, has launched outreach programmes that focus largely on young children and the indigent.

While these programmes are operational, lodge members admit that the 253-year-old organisation can do more to prevent young men from being lured into criminal activities.