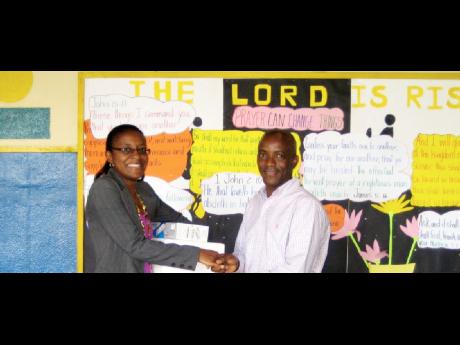 The donation came in the form of a well-needed Mimio wireless interactive device that is able to project interactive images on to the white boards used exclusively by the school. This device will ultimately assist the school in improving the literacy levels of its students, and according to the principal, it will serve as a more effective means of aiding slow learners.

"The St Peter Claver family is very happy for this education software. It will enhance the literacy of our students," said Karen Jackson-Reynolds, principal. "As you know, the thrust of the ministry is to improve literacy in all schools, and anything we can receive to enhance is greatly appreciated, and we express our most sincere gratitude to the Sicard family for it."

The foundation is the brainchild of Philbert Sicard, a past student of the school. He, along with one of his brothers, Clifford, and his two sisters, Doreen and Naomi Sicard, established the fund in honour of their parents, Clifford (senior) and Delores Sicard. The siblings, who reside in the United States of America, saw it fitting to form the foundation, which has as its primary objective, making a positive contribution to the education sector in Jamaica, particularly at the primary level.

Desmond Sicard, the local contact for the foundation, also a sibling of the four past students, presented the device during the school's morning devotions. Sicard told The Sunday Gleaner that the foundation chose the school as the first project as his siblings were past students.

"We did not want to just buy anything, so we asked the principal what the school was most in need of right now ... . she then had a meeting with the staff who decided, and we acted upon it," Sicard said.

St Peter Claver has 15 students and three teachers who are currently in Canada, where they are spending 10 days as part of a cultural-exchange programme sponsored by Jamaican Self-Help. The foundation is also planning to make donations to other schools in the future.