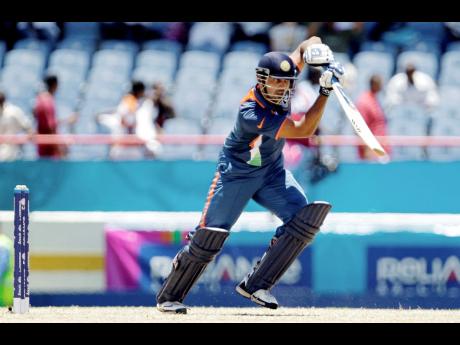 India's Murali Vijay on the go yesterday during his top-score of 48 against Afghanistan in a Twenty20 Cricket World Cup match at the Beausejour Cricket Stadium in St Lucia. India won by seven wickets. - AP

An aggressive innings by debutant opener Murali Vijay and an incisive opening burst from left-arm seamer Ashish Nehra propelled India to a comfortable seven-wicket win over Afghanistan in their opening game of the World Twenty20 Championship at the Beausejour Cricket Stadium yesterday.

In a second match at the same venue, defending champions Pakistan were handed a slight scare before smothering Bangladesh by 21 runs.

Winning the toss and deciding to field first, the Indians restricted the ICC affiliates to 115 for eight off their allotted 20 overs, thanks to Nehra's haul of three for 19 from his four overs

India lost Gautam Gambhir (4) cheaply with the score on 19 in the third over of their run chase but Vijay and Suresh Raina (18) added 27 from 19 balls for the second wicket to deny the Afghans.

Raina struck one four and a six off 13 balls before he was trapped lbw by leg-spinner Samiullah Shenwari.

Any hopes Afghanistan had of making headway were soon dashed, as Vijay and the dashing Yuvraj Singh put the game away with a convincing 55-run, third wicket stand off 49 balls.

The right-handed Vijay was the third wicket to fall, caught on the long-on boundary by Shahpoor Zadran as he attempted to hit medium pacer Hamid Hassan out of the ground.

Earlier, opener Noor Ali struck an impressive 50 off 48 balls with four fours and shared in a vital fourth wicket partnership of 68 with Asghar Stanikzai, to keep the Afghan innings afloat.

In the day's second match, Pakistan, 172 for three off their 20 overs, were put on the ropes by a 91-run third wicket stand between Mohammad Ashraful and captain Shakib Al Hasan as Bangladesh threatened.

But once Mohammad Sami returned for a telling second spell, he disrupted the partnership and sent the innings into decline to leave the Tigers on 151 for seven when the overs ran out.

Sami, finished with figures of three for 29 including two in one over, and accounted for Shakib who stroked 47 from 31 balls. Ashraful, meanwhile, cracked the top score of 65 from 49 balls.

With Bangladesh under pressure at 31 for two in the sixth over, the duo came together in a daring stand that required a mere 59 balls and which sent worry throughout the Pakistan camp.

Both batsmen were bold and adventurous with Shakib striking three fours and two sixes and the ultra aggressive Ashraful hammering four fours and three sixes.

Sami was recalled and he struck with just his second ball of the 15th over when Shakib failed to clear Umar Akmal at long-off at 122 for three.

With just one run added, Mahmudullah popped the final delivery of the over to point as Bangladesh slipped to 123 for four.

Ashraful looked set to carry on but when his improvised leg-side scoop was held by wicketkeeper Kamran Akmal at 140 for five in the 18th over, the backbone of Bangladesh's resistance had been broken.

Earlier, Pakistan had benefitted from a rollicking opening partnership of 142 between Man-of-the-Match Kamran Akmal and Salman Butt who both stroked 73 in contrasting styles.