Taylor feeling 'irie' as she gets ready for World T20 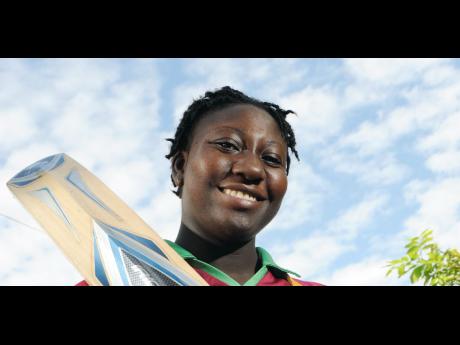 Stafanie Taylor is having the kind of year that cricketers dream about.

She is one of the top five ICC O-day International allrounders, in the Top 10 among batsmen; she was nominated for ICC Women Player-of-the-Year award last September and is the current Jamaica Cricket Association's player-of-the-year.

Her achievements on the field are just as important as the ones she is striving to attain off the field - she's a full-time student, as well as an International Cricket Council Thinkwise Ambassador. However, right now she is concentrating on helping the Windies girls make it all the way to the top spot in the upcoming ICC World T20 Tournament, due to bowl off on May 5.

"Right now I am feeling irie!" the upbeat Windies Number 7 said. "In fact the whole team is very confident that we can do this ... win this for the region, especially after the way we performed against England in the series last November (Windies girls beat the world champs 2-1 in St Kitts). We have worked really hard and once we put our minds to it, we believe we can do it."

"We know how much this tournament means to the people of the region. Fans come up to me and tell me how proud they are of me and how they want me to do well. With the fans on our side we will do well."

The 18-year-old who identified Chris Gayle as her most admired player, does not feel that she is under too much pressure as she is focused on doing her job with the bat at the top of the order. She is also a clever off-spin bowler. Her statistics in T20 Internationals are quite impressive. She has played 12 matches with 423 runs at a healthy average of 47 per innings and a superb strike rate of 122.25. Her topscore is 90 against Ireland back in 2008, which came off just 49 balls. She has managed 12 wickets at 16.33 each at an economy rate of 5.6 per over.

"I am fitter than I have ever been. I spent much of the off-season working on my all-round fitness. I am also spending a lot of time in the nets and I feel my improved fitness is making a difference with my batting performances."

Taylor is also a full-time student in Jamaica and recognises that her studies are just as important as the sport she loves. She travels on cricket tours with her school books. "I am having to balance playing with studying and sometimes it gets hard but I am getting better at this - when I am on the field I am a cricketer and once I have free time I spend it studying."

She has made an outreach to her community and the region by signing on to be Thinkwise Ambassadors. Thinkwise is the International Cricket Council's partnership with UNAIDS, UNICEF and the Global Media AIDS Initiative. This is another avenue for the young Taylor to represent the Caribbean in a positive light and she is willing to do whatever she can to help those in need.

She is part of radio and television commercial across the region urging listeners to "protect your wicket in cricket and in life." The other West Indian cricketer signed up as a Thinkwise Ambassador is batting star Ramnaresh Sarwan.

The women's event opens on May 5 and all the first round matches will be played at Warner Park in St Kitts. West Indies are drawn in Group A, with England, Australia, and South Africa. Group B includes: Sri Lanka New Zealand, India and Pakistan. The semis will be played at Beausejour in St Lucia and the final at Kensington Oval in Barbados on May 16.