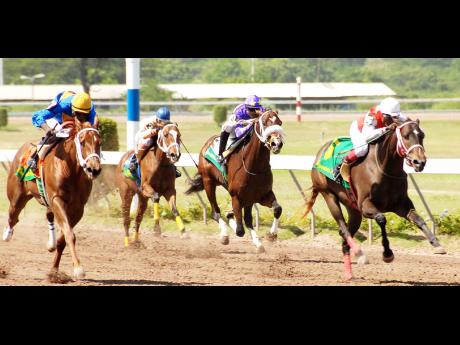 ELECTRIFYING, highly fancied at 1-1, got up in the nick of time to win the season's first two-year-old race, the Starters' Trophy over 400 metres straight, in a driving finish at Caymanas Park yesterday.

Ridden by Shane Ellis for co-owners Elias Haloute and Stephan Narinesin, the Anthony Nunes-trained ELECTRIFYING left the gate sluggishly on the outside of the seven-horse field, as 4-5 favourite ANNIE OAKLEY showed good speed under five-time champion Trevor Smpson to lead comfortably.

But ELECTRIFYING got her act together leaving the furlong pole, digging in nicely to catch and beat ANNIE OAKLEY by a head within shades of the wire.

The winner, a big chestnut filly by Traditional out of Valors Star, was bred by the HAM Stables Limited. Ellis said he was confident of winning, but had to work overtime.

"She had looked well in her preparation and although not the best away, I got her to settle and she showed a good turn of foot in the end to win narrowly.

"She would have learnt a lot from this initial experience and I.m looking forward to riding her again," said the second generation jockey, son of three-time '60s champion Winston 'Nero' Ellis.

Meanwhile, the lightly raced ODIN, running as the 3-5 favourite with Allen Maragh aboard, won the closing Alex's Import 'Dig Out' Handicap Race No. I over 1300 metres, this for maiden three-year-olds. The "Dig Out' handicap was previously sponsored by Track Price Plus Limited.

ODIN, who closed strongly to catch long-time leader UNSUNG HERO (5-1) midway the last furlong and held on by three-quarter length from REGIONAL CHARMER (7-2), is trained by Norman Palmer for owners M.S. Stables. He is a bay colt by Traditional out of Zig's Quiet Lady.

On a day when apprentice Doushane Gordon and trainers Nunes and Dwight Chen had two winners each, the nine-race programme was marked by some notable upsets - ALEXANDRA'S SPIRIT at 42-1, PRINCE ROHAN at 13-1 and SUGAR'S IMAGE at 8-1 in the hotly contested overnight allowance sprint.