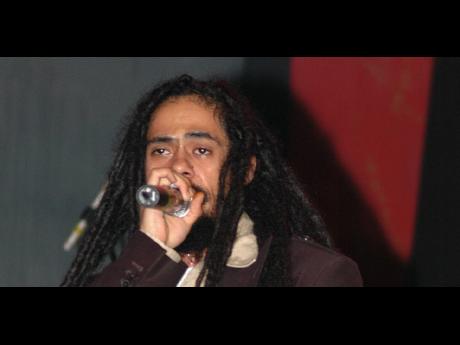 With his collaborative album, Distant Relatives, with rapper Nas scheduled for release on May 18, Damian 'Jr Gong' Marley is quite optimistic.

Speaking with The Gleaner last Friday at the Bob Marley Museum, Marley said he was anxious to see how people will respond to the album.

"I don't know (how they will respond). I am kinda curious to see. I hope them will respond well," he said, relaxingly perched on a step outside a building.

"So far, of the singles that we released, people have been responding good and we give thanks for that. I am just excited to see on May 18 when it comes out, how the world will respond and embrace it."

The anxiety is only natural, as he has been working on the album since early last year.

"We have been working on this album since the beginning of last year and now it is getting ready to be released. That has been the focus from that time till now. That's the kind of commitment it really tek. We really do the music together, so in that sense we were part of production more than just lyrics. It's the type of commitment like any normal project 'cause we try to do our best on every one. I haven't been doing anything else really, in terms of studio work, since this album," he told The Gleaner, as the sound of some of Bob Marley's music played lightly in the background.

However, with Nas, he did an American tour during summer last year, as well as a performance at Reggae Sumfest in Montego Bay. They also released the music video for As We Enter, which is a single from the album. A promotional tour is also scheduled to start immediately after Distant Relatives is released.

But this is not the first time he is working with Nas, as they collaborated on Marley's Road To Zion that was part of his 2005 Welcome To Jamrock album.

"I have been a great fan of his (Nas') music. We kinda have a similar message over the years, in terms of saying something conscious. The reason why we decide to work on the Road To Zion is the same inspiration, just a continuation of that relationship," Marley told The Gleaner.

However, he could not say if or when they would work together on another project after this.

"When we did Road To Zion is not like we did plan to come and do an album after. It come after because it just happen. Anything is possible. We would like to do a next album together but I wouldn't say it's in the plan. So, I definitely can't tell you say we planning to go to the studio next two months or whatever the case may be, but we would like to see some more work together," he said.

While they have differences, they are linked by their African ancestry, which Marley says is a constant theme on the album, which has a lot of live instruments.

"Even the music kinda reflect an African sound. So, Distant Relatives was just the appropriate title for all of those reasons," he said of the album which features other artistes, such as K'Naan, Stephen Marley, Lil' Wayne and Dennis Brown.