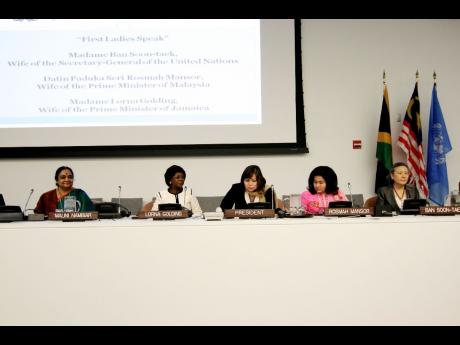 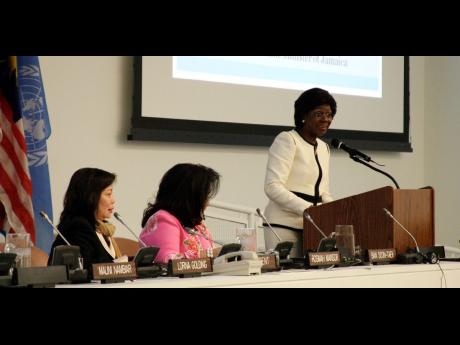 Mrs Lorna Golding (right) with other speakers during her presentation in New York for the 'First Ladies Speak' event. Passionate about issues involving children, Mrs Golding spoke on the projects she is championing within Jamaica. Her speech was very well received. - Contributed photos
1
2

Mrs Lorna Golding, wife of Prime Minister Bruce Golding, was one of the first ladies from around the world invited to make a presentation at the United Nations in New York on April 16. As the founder and chairperson of the Jamaica Early Childhood Development Foundation, she addressed the Women's International Forum on the Jamaican situation regarding the care of young children and role of her organisation in that regard. Below is an excerpt of the speech.

In 2008, I launched the Jamaica Early Childhood Development Foundation (JECDF). I was motivated by memories of my husband's and my experiences of rearing children and nurturing them by creating an environment filled with love, and encouraged learning while helping to build their confidence and awareness in themselves and the world around them. Today, we are proud parents of three exceptional adults.

But it was the birth of my first grandchild in early 2008 that brought those memories back more vividly. As I watched him grow, it became clearer to me that all Jamaican children must be afforded access to the same kind of safe, healthy and nurturing environment to support their growth and total development.

Like many countries, Jamaica has its fair share of economic and social challenges which can and have had adverse effects on the development and education of children. One issue with which we are still grappling in Jamaica is the concept of gender equity; which is the distinction in the treatment and socialisation of men and women, which starts from birth.

So profound are these distinctions, that in the early childhood years from zero to eight, we have seen a trend of young girls entering the formal school system far more prepared than their male counterparts to handle the new rigours of school. Several factors have been suggested as reasons for this phenomenon. For example, girls tend to be more closely supervised; they are expected to be more disciplined; they are usually given greater responsibility for chores and other tasks in the home; and, they are usually not allowed to leave the home or yard.

Professor Elsa Leo-Rhynie, a distinguished Jamaican scholar on gender issues, has pointed out that:

"There is a gender difference in terms of the danger against which they (boys and girls) are being protected. In the case of girls, it is sexual assault, sexual involvement and the possibility of pregnancy; for boys it is crime, including drugs. There is, however, a symbiotic relationship between the yard and the street for boys - the street is expected to toughen and prepare the boy for survival, which is an extension of the teaching being given in the yard. The street has nothing to offer girls besides danger and disgrace."

With greater protection and efforts towards their development, it is not difficult to see why Jamaican girls would be more prepared than boys at the beginning stages of the formal education process.

These gender distinctions and inequities in the treatment of girls versus boys are rooted in our past. In fact, our education system was imported from our colonial past and for a long time did not reflect philosophies about male and female social roles consistent with Jamaican norms and history. Nonetheless, they had an impact on educational policy and determined educational practice.

There are other issues which challenge the development of young children, not the least of which is the circumstance of poverty faced by some of our people. Children raised in poverty tend to complete less education than those from more financially capable homes. Quite often children from poorer homes are exposed to poor nutritional practices and so not only are their parents faced with the difficult costs of their education but even when they are sent to school regularly, their nutrition practices are so poor that learning becomes difficult if not impossible.

In establishing the JECDF I have tried to support and promote the provision of improved services and resources for all Jamaican children, regardless of gender or background. The JECDF has a vision that one day every Jamaican child will have equal opportunity to develop their full potential to contribute positively to their country's development.

The JECF is a strong proponent of early stimulation practices. A large part of our fund-raising efforts has targeted early childhood institutions that are engaged in these practices with a view to promoting the social, nutritional, physical and psychological development of children between the ages of zero to eight years.

Some of the projects we have supported include the expansion of libraries, establishment of nutrition programmes, creation of computer labs and expansion of resource and technology centres without regard for gender, background, physical or mental ability.

One particular project that is dear to me is conducted at the Hope Valley Experimental School in St. Andrew, Jamaica. The school has a programme where both disabled and able-bodied children learn together.

It is a great example of the principles supported by the JECDF that is, equity and opportunity for all children. Happily, the Foundation was able to provide much needed financial support to the school to expand its library and nutrition programmes.

We have also supported projects that aim to increase the environmental awareness of young children. We have assisted in the establishment of vegetable gardens at several schools. These gardens have provided the children with great lessons in nature and the environment and received participation from both boys and girls. But, more than that, these garden projects help to build self-confidence as the children recognise their own important role in the growth of their gardens regardless of their gender or social circumstance.

The JECDF and the National Plan

The work of the JECDF is really part of a bigger network of independent support programmes. Organisations like ours feed into the national effort to ensure the successful education and development of all Jamaican children. We are really like a resource partner to the Government and hence we have similar goals and visions.

The Government of Jamaica recognises a very fundamental principle behind much of the work that we support and fund. Children learn best and fastest during their early years and, therefore, we must ensure that they have the right start, the right way at the right time. In fact, the Jamaican Government recently developed and adopted a National Strategic Plan (NSP) for early childhood development to guide Jamaica's approach to early childhood education over the five-year period 2008 to 2013.

The NSP is being implemented by the Early Childhood Commission. This commission was established by an Act of Parliament and is mandated to coordinate all programmes, plans and activities related to early childhood development.

My country has its challenges, but we are committed to the growth and development of our nation. It starts with our children.