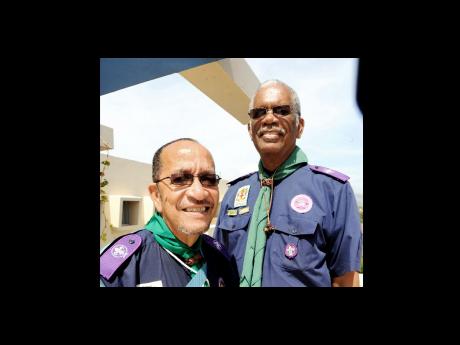 Paul Millser (left), deputy to the chief commissioner, and the Reverend Barrington Soares, chief commissioner of the Scouts Association of Jamaica, are encouraging Jamaicans to become more involved within the local Scout movement. - Rudolph Brown/Photographer

The Scouts Association of Jamaica (SAJ) is on a mission to reclaim its prominence in society by wooing new persons to join its ranks and boost leadership.

Chief commissioner, the Reverend Barrington Soares, said the scouting movement in Jamaica, which is now in its 100th year, has been a cornerstone of society. The association aims to develop young people into positive mentors and provide them with a moral compass.

"It is a process through education with a holistic view of the youngster to understand self, to work with the community and others," Soares said.

"The major thing is to give them the direction. Our Scout law and promise embody this: Duty to God, duty to self and duty to others. We must be prepared to do all of that," he added.

Forty years ago, every all-boy high school in Kingston and St Andrew had a Scout troop and each troop consisted of 32 members.

"We want these schools to have a renewed interest in scouting," said the chairman of the SAJ, John Leiba.

"Scouts are not being seen as we used to be seen," the chief commissioner said. "We want to be seen."

For more information on how to be a Scout leader, establish a scout movement in your school, or to sponsor a Scout (donations are tax deductible), contact the Scout office (876) 926-7209, or email the Scouts Association at ja.scouts@cwjamaica.com.