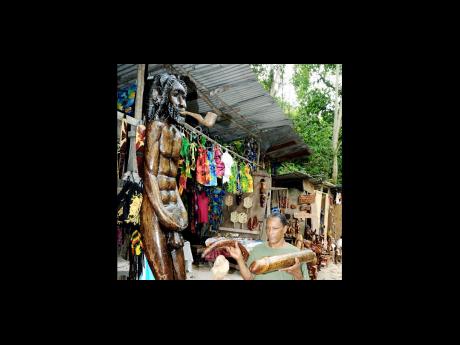 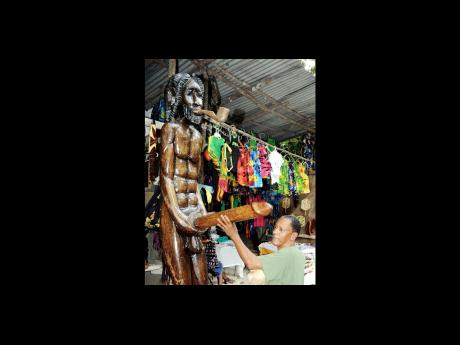 HE IS the big guy that stands in Fern Gully, St Ann, with more than his fair share of wood. His maker calls him Ready Freddy but perhaps the artist may soon reconsider changing his name to Recession Buster.

"With recession now, if it wasn't for this guy, we wouldn't make a dollar," artist Rennie Traille told The Gleaner.

Ready Freddy is a 10-foot wooden structure carved in the image of a Rastafarian. His hardened member extends more than two feet, making it difficult for passers-by to miss it.

Traille said it is this bold figure, which he values at $100,000, that is stimulating business in the cool twists of the key corridor to the north coast as craft vendors are experiencing a downturn in sales.

"The market so slow now, but when tourist pass and see this guy, they stop and take a picture and spend a money. This guy do a lot of good for everyone here," Traille said.

But Ready Freddy is not a fan of all. Many persons have commented that it is not only obscene but also lament the birth of a plethora of little Freddys being displayed in the craft corner as art.

Traille told The Gleaner that he has been taken before the court because law-enforcement personnel thought his work was offensive.

The Emancipation Park statue he speaks of is the 'Redemption Song' piece done by Laura Facey-Cooper, depicting two nude ex-slaves.

When the statue was unveiled in 2003, it evoked immense controversy as many persons said it was vulgar.

Traille, however, is of the view that both Ready Freddy and Redemption Song are authentic works of art. In fact, he has no regrets about the day he first sat down to carve his notorious creations.

"Mi know it woulda be a good attraction, and it work out very well for mi. This guy send mi three children to school, so it really work out good fi mi. People just stop, tek picture and spend a money.

"It work out for everybody who is here in the craft business. People come off the boat just to see him (the statue). His name is so popular, he is all over the world," Traille said.

Do you believe the Fern Gully carving is obscene? Or is all the criticism exaggerated - is it genuine art? What's your view? Shoot us an email to editor@gleanerjm.com; fax 922-6223; or post to Fern Gully Carving, c/o The Gleaner Company, 7 North Street, Kingston.