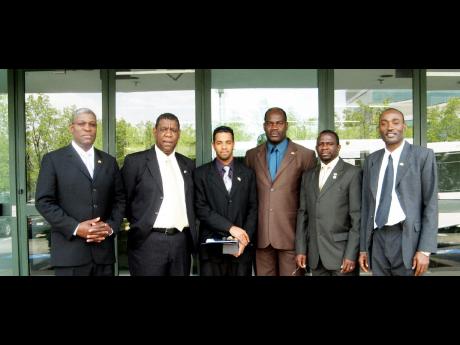 Commissioner of Police Owen Ellington (left) meets up with (from second left) Senior Superintendent Ealan Powell; Vaughn Smith, from the Office of the Director of Public Prosecutions; Supt Fitz Bailey, Senior Superintendent Egbert Nelson and Assistant Commissioner Gervis Taylor, while attending the graduation ceremony, in the United States for a recent executive forum on anti-terrorism hosted by the United States Department of Justice. - Contributed

Four senior members of the Jamaica Constabulary Force (JCF), recently attended an executive forum on anti-terrorism hosted by the anti-terrorism assistance programme of the United States Department of Justice.

Forming part of the Jamaican delegation to the executive forum was Vaughn Smith, from the office of the Director of Public Prosecutions. Also participating were senior law enforcement officers and prosecutors from The Bahamas and the Dominican Republic.

The programme was held in collaboration with the University of Maryland and the American University and was designed for senior police executives responsible for the direction and oversight of law enforcement operations, and administration and training. In addition, participants included representatives from the criminal justice system.

The primary objective of the programme was the building of capacity of the participants to enable them to better manage security threats in their countries. Some of the subjects covered were policing in a democratic society; the role of the media in a free society; threats in terrorism; the use of technology and forensics in the war on terrorism; risk management and threat analysis and proactive policing and problem solving.