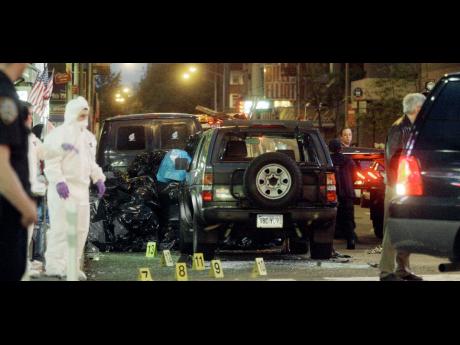 Police combed through a charred sports utility vehicle (SUV) and a crude assortment of explosives yesterday for clues to a failed bombing in Times Square, a major tourist destination, as a monitoring group reported that the Pakistani Taliban had claimed responsibility for the terrorist threat.

An intelligence monitoring group released a one-minute video allegedly from the Pakistani Taliban, in which it claimed responsibility for the failed bombing in a smoking SUV left parked in the city on Saturday night, clearing thousands of tourists and theatregoers from the city's busiest district.

The US-based SITE intelligence group, which monitors militant websites, said the Pakistani Taliban claims the attack is revenge for the death of its leader Baitullah Mehsud and the recent killings of the top leaders of al-Qaida in Iraq. Images of the slain militants are shown as an unidentified voice recites the message. English subtitles are at the bottom of the screen.

New York authorities were examining the SUV at a forensic lab for fingerprints and DNA evidence and had isolated a 200-pound (90-kilogram) gun locker at a police firing rang in the Bronx. They were trying to determine whether the locker, recovered from the SUV, could contain more powerful explosives that could have detonated the main explosive device.

The bomb, which partly detonated but malfunctioned, could have sprayed shrapnel that killed pedestrians in the immediate vicinity, top NYPD spokesman Paul Browne said.

"We avoided what could have been a very deadly event," Mayor Michael Bloomberg said. "It certainly could have exploded and had a pretty big fire and a decent amount of explosive impact."

The NYPD bomb squad "has seen sophisticated devices before and they described this one as crude," Browne said. "But it was nevertheless lethal."

No suspects were in custody. Police were going through surveillance video that showed the car driving west on 45th Street before it parked between Seventh and Eighth avenues. Police were looking for more video from office buildings that weren't open at the time.

Homeland Security Secretary Janet Napolitano said on NBC's 'Meet the Press' that officials are treating the incident as a potential terrorist attack.