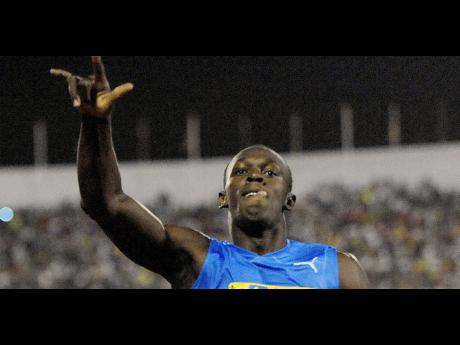 Usain Bolt stole the show on what was a remarkable seventh renewal of the JN Jamaica International Invitational at the National Stadium on Saturday night, with a spine-chilling 19.56-second run in the 200 metres, to send an early-warning shot to his rivals in what was the fourth-fastest time recorded over the distance.

Bolt could do no wrong for the capacity crowd, and the effervescent showman demonstrated his appreciation to the fans by doing a lap around the track after the event to return their applause.

"I had to come out here and give Jamaica a good show. This is the first time that the meet has had this kind of crowd support, so I couldn't come out here and mess around, I had to give the people what they came here for," said Bolt, still full of energy after his powerful run.

"I did my best and I hope they appreciate it."

The American pair of Wallace Spearmon, 19.98, and Ryan Bailey, 20.43, were a distant second and third, respectively, as the double-world record holder stamped his authority on the field, while admitting that he does have a few things to correct before the season gets into full swing.

"This has set me up really well. In previous seasons, I probably wouldn't have done so well at this point of the season, but I came here and ran my heart out, I gave it a good shot," said Bolt.

"I'm pretty much about 95 per cent ready and I'm feeling good. I have a lot more work to do and I have about a month and a half before I get into the full swing of competition.

The towering 23-year-old is still not certain about his participation at this year's Commonwealth Games in India, but is already looking forward to facing the likes of compatriot Asafa Powell and American Tyson Gay. This year will also see the return of US sprinter Justin Gatlin, who was banned from the sport for four years for allegedly using performance-enhancement substances.

The Commonwealth Games, to be held in India, is one of the main international championships this year but Bolt is still not certain about participating.

Bolt, however, expressed concerns about certain aspects of his technique.

"Nothing has improved, I think I have gone backwards, actually. My start is a little rusty because I haven't been doing a lot of starts. Also my corners, so there is a lot more work to go into this, but we are just in May so I'm OK," Bolt pointed out.