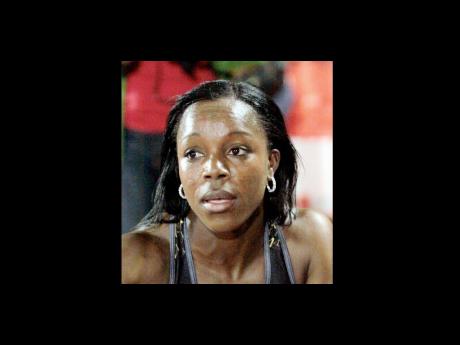 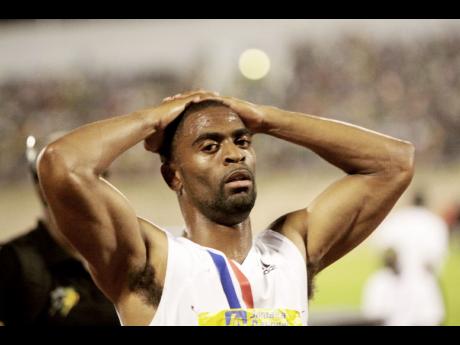 USA's Tyson Gay reacts after winning the men's 400m in 45.05 seconds. during the Jamaica National International Invitational athletics meet at the National Stadium, Kingston, on Saturday, May 1, 2010. - Anthony Minott/Freelance Photographer 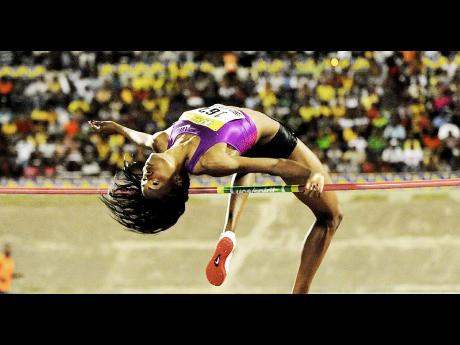 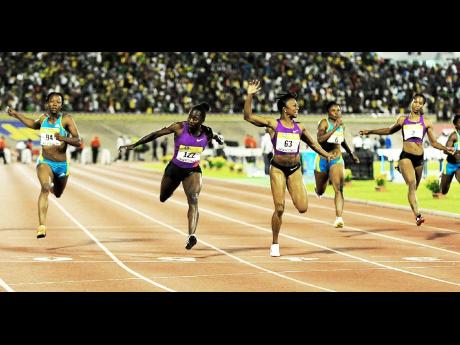 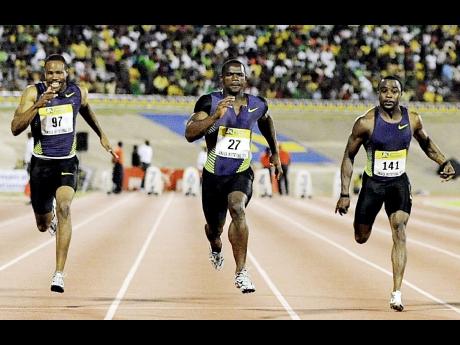 The world's fastest man, Olympic and world 100m and 200m champion, Usain Bolt, had the pick of the performances with a powerful 19.56-second run in the 200m to register the fourth fastest time in the event in what was his first meaningful race of the season.

Bolt was out of his blocks in a hurry and had already wrestled the advantage from the other competitors with only a few strides. Despite the clear advantage, the Racers Track Club flag-bearer powered through the finish line to leave close friend Wallace Spearmon (USA) a distant second, with a time of 19.98, while Ryan Bailey (USA) stopped the clock at 20.43 for third.

"This time has set me up really well," said Bolt. "In previous seasons I probably wouldn't have done so well at this point, but I came here and ran my heart out."

Jamaica's sprint queen, Veronica Campbell-Brown outclassed her competitors when she took the women's equivalent with a time of 22.60, with Cydonie Mothersill (Cayman Islands), 22.70, and Bianca Knight, 22.77, finishing second and third respectively.

In another world-leading performance, American speedster Carmelita Jeter stormed back in the last 30 metres of the women's 100m to better Jamaica's Olympic and world silver medallist Kerron Stewart, with a time of 10.94 seconds.

Stewart, who had an uncharacteristically great start, clocked 10.96, while Marshevet Myers (USA), 11.13, was third.

"It was a good race. I just wanted to come out and have fun in front of my home crowd and represent them," said Stewart.

"I'm behind in my preparation but in time, everything will come. A champion is always a champion, you just have to continue working hard," added Stewart, who will now turn her attention to the Doha Diamond League meeting.

Nesta Carter made the most of Yohan Blake's false start expulsion to win the men's 100m in 10.09 ahead of former World Champion-ships silver medallist, Darvis Patton, 10.23 and Olympic silver medallist, Richard Thompson (Trinidad and Tobago), who clocked 10.25.

American 100-200 speedster Tyson Gay (USA) has been doing a lot of strength work since the start of the season and he continued this pattern on Saturday.

Facing the starter in the 400m, Gay, the 2007 World Championships triple gold medallist, ran a well-executed 45.05, to get the better of the fast-closing Jamaican, Jermaine Gonzales, 45.22, and Trinidad and Tobago's Renny Quow, 45.64.

However, he appeared ill just after the race and was seen vomiting in the mixed zone. Later, he was rehydrated by the medical team on the ground and showed clear signs of improvement.

The Jamaican duo of Novlene Williams-Mills and Kenia Sinclair, also recorded world leading times in the 400m and 800m, respectively.

US high jumper Chaunte Howard-Lowe was a crowd favourite as she branded several popular Jamaican dance moves on her way to a world leading 2.00-metre leap in her event.

Howard-Lowe, who claimed silver at the 2005 Helsinki World Championships, cleared the mark on her third attempt, to register a clear win over the field, which was eliminated much earlier.

Howard-Lowe was also successful in the long jump pit, leaping 6.61m to finish ahead of country-women Rhonda Watkins, 6.57m, and Funmi Jimah, 6.53m.

Sprint hurdler Dwight Thomas won his event in 13.33, with the USA's Antwon Hicks second in 13.40 and Great Britain's Andrew Turner, 13.46, rounding out the top three.

World champion Kerron Clement (USA) was quickest in the 400m hurdles, with a time of 48.55, finishing ahead of national champion Isa Phillips, 48.87, and Markino Buckley, 49.37.

World champion Christian Cantwell won the shot put with a meet record 21.50m. Cory Martin was second with a hurl of 20.82m, while Noah Bryant, 20.07 was third.

Edwin Allen and Jamaica College brought the curtain down with victories in the high school girls' and boys' 4x400m relays.