Invitational was a spectator's dream 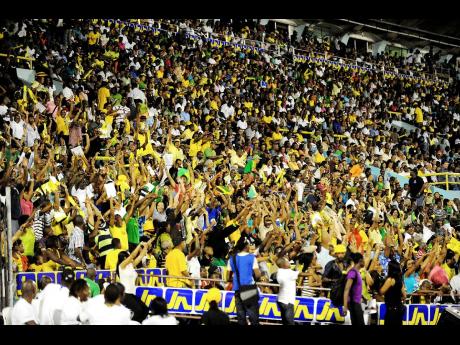 Spectators at a packed National Staduim enjoy themselves during the Mexican wave at the JN Jamaica International Invitational meet on Saturday. - Ian Allen/Photographer

The National Stadium was a hotbed of excitement on Saturday night as thousands of jubilant fans packed the venue, spilling over unto the cycle track, to get a glimpse of the constellation of track and field stars who were on show at the JN Jamaica International Invitational.

It had been years since such a great number of spectators gathered inside the venue for an athletic event, except the Boys' and Girls' Championships. So great was the turnout that the Jamaica Fire Brigade had to close the gates, leaving scores of fans on the outside.

With the excitement starting off the track while the sun was still up, with popular entertainment campaigners such as Freddie McGregor, Chino and I-Octane providing the early vibes, fans began pouring into the venue with hours to spare.

Dubbed as a showdown between some of Jamaica's best athletes and their USA counterparts, it was little surprise that many patrons did not shy away from branding their national colours.

The entire stadium was galvanised in a patriotic cocktail of black, green and gold, in a heart-warming transformation of sorts into a theatre of Jamaican athletic prowess.

Each athlete was greeted with shouts of approval, despite the colour of their passport, as the spirit of friendly, but competitive, rivalry blanketed the venue.

"It's amazing, I absolutely love the atmosphere," said US sprinter Carmelita Jeter, after winning the 100m ahead of Jamaican Kerron Stewart. "Everybody is so friendly and this was a fantastic experience for me."

Minutes later, the crowd erupted into an eye-catching Mexican wave, stapling a look of awe on the faces of many visiting athletes.

The noise levels increased a few decibels as Jamaica's sprinting deity, Usain Bolt, appeared through the McDonald Tunnel on the bleachers side of the facility. Their star had arrived.

Sizzla's Rise to the Occasion beefed up the expectant atmosphere in a not-too-subtle encouragement from the sound system operators.

"I came to see (Usain) Bolt, he's my athlete and I am hoping that he breaks his record tonight," said Jennifer Williams, who journeyed from Montego Bay to witness the talent of the triple world record holder.

There were no records for Bolt this time around, but his blistering 19.56 run, which is the fourth fastest time in the event, was more than enough to satisfy the drooling audience.

His post-race trek around the entire track to thank his fans was a sign of his development and maturity into bonafide star quality, and it was well received by the crowd, who returned his applause.

Before Bolt stole the show, as he has become accustomed to these days, other athletes such as Veronica Campbell-Brown, Kerron Stewart, Jeter, Tyson Gay, Jermaine Gonzales, Nesta Carter and Chante Howard-Lowe were all well received by the spectators.

Chairman of the organising committee and president of the Jamaica Amateur Athletic Association (JAAA), Howard Aris, was elated.

"When you have the quality of athletes in all events that were present and the high level of competition, we realised that it would be our largest crowd ever, even though we were not sure as to what the actual size of the crowd would be," said Aris.

"We are happy that the event turned out the way it did, we thank God that we were able to overcome the difficulties that we faced."