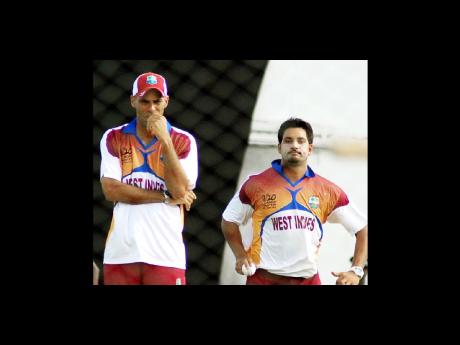 All-rounder Darren Sammy says he is looking to tie down his spot in the regional team following his explosive performance that fired West Indies to an emphatic 70-run victory over Ireland in their opening match of the World Twenty20 Championship on Saturday.

The West Indies will play their second match in the competition when they host England at the Guyana National Stadium in Providence today.

The 26-year-old all-rounder belted a cameo 30 off 17 balls, snatched three for eight and claimed four catches to headline the West Indies triumph.

"When I went in to bat, I tried first to get myself in, and then decided to hit as straight as possible. I knew I had the power to clear the boundaries, so I backed myself," said Sammy, who helped pull West Indies around from a precarious position of 93 for six in the 16th over.

"I am not getting too far ahead of myself. I want to keep putting in the hard work and I'm looking to cement a place in the team."

Sammy has been in and out of the regional squad in recent years. Since his international debut six years ago, he has only managed eight Tests and 38 one-day internationals. He played just two matches in last year's tournament in England, producing miserly spells on each occasion.

Sammy said the atmosphere at the Guyana National Stadium in Providence had provided the ideal environment to perform.

"I enjoyed every moment of it! I am a confident player and I just gave my all for the West Indies. It was an electrifying atmosphere out there and we just went with the momentum," Sammy pointed out.

"There is huge expectation from our fans and we are happy to give them something to celebrate at the start of the tournament. The entire Caribbean is backing us and we want to make them proud."

Exciting middle-order batsman, Eion Morgan, said Saturday that England were raring to go in their first assignment of the World Twenty20 Championship against West Indies today.

"I think we have a good chance of winning the tournament. We have had a good preparation period over the last couple of weeks, and the guys are all confident of making a big impression in the Caribbean," Morgan revealed.

The dashing left-hander, who has done well for England in this innovative version of the game since making his debut last June, said the team was well-balanced and once they remained focussed, lifting the trophy in Barbados later this month would not be difficult.

"I am confident that we will be the championship team in this competition," he said.

"I know a lot of teams have really prepared for this competition because of the importance, but I think we have prepared in aspects of our game, that is why I am very optimistic."

The 23-year-old Morgan, who cracked a 45-ball unbeaten 85 against South Africa last year to register his highest Twenty20 score, reckoned that the pitches in the Caribbean were very good for batting and remained upbeat he would come good against the Windies.