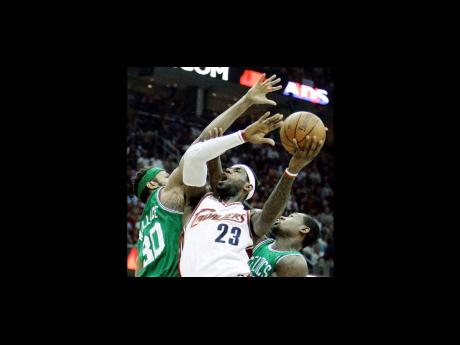 Cleveland Cavaliers' LeBron James (23) tries to shoot between Boston Celtics' Rasheed Wallace (30) and Tony Allen in the first quarter of Game One in the second round of the NBA basketball playoff series on Saturday night in Cleveland. - AP

LeBron James scored 35 points and Mo Williams added 20 as the Cleveland Cavaliers stormed back in the second half to beat the Boston Celtics 101-93 on Saturday night in Game One of their Eastern Conference semi-final series.

James, playing with a sprained and bruised right elbow, delivered yet another memorable performance as the Cavs withstood the Celtics, who led by 11 in the third.

James, who also had seven rebounds and seven assists, drained a three-pointer with 22 seconds left to put Boston away.

Rajon Rondo had 27 points and 12 assists and Kevin Garnett finished with 18 points and 10 rebounds for the Celtics. Game Two is tonight.

Dismissed as being washed up, the 17-time NBA champion Celtics controlled the tempo from the start and were on the verge of swiping home-court advantage away from Cleveland. But James, who seemed to be bothered by the elbow early on, picked it up down the stretch.

"He's a guy that is going to deliver," Cavs coach Mike Brown said. "As the game went along he got more aggressive and the shots started to fall."

"Throughout the game it loosened up," said James, who received his second Most Valuable Player award yesterday in his hometown of Akron. He won the NBA MVP in a lopsided result last season.

This is the second time in three years that the Cavs and Celtics are meeting in the conference semi-finals, and there is no love lost between them. In 2008, the Celtics won a rugged series in seven games on their way to the championship. If Game One was any indication, this series could be equally entertaining.

"This not going to be easy for either team, you can see that," Celtics coach Doc Rivers said. "It's going to be a tough series."