Down to the wire 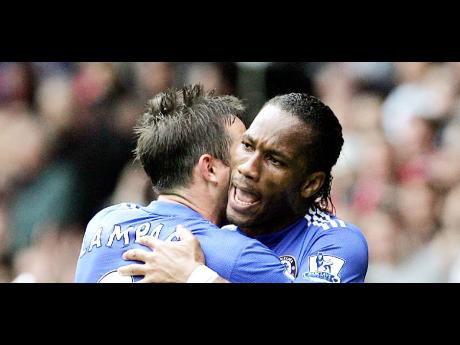 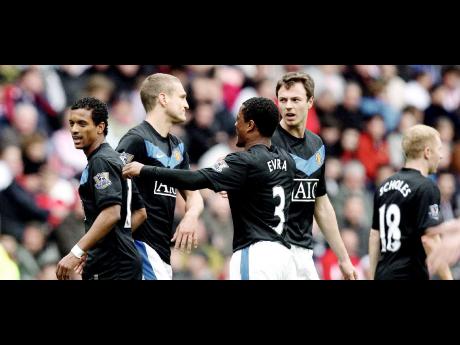 Manchester United's Nani (left) celebrates his goal with his teammates during their English Premier League soccer match against Sunderland at the Stadium of Light, Sunderland, England, yesterday. - AP photos
1
2

Chelsea stayed top of the Premier League with a 2-0 victory at Liverpool yesterday, while Manchester United made sure the title race went to the last day with a 1-0 win at Sunderland.

Didier Drogba and Frank Lampard scored Chelsea's goals at Anfield; and Nani's first-half strike at the Stadium of Light kept Man United a point behind going into the final round of games.

Chelsea host Wigan and United welcome Stoke on Sunday, May 9.

United will need Chelsea to drop points if they are to become the first team to win four English league titles in a row. But Chelsea have won 16 of their 18 home games so far in scoring 60 goals at Stamford Bridge.

"All we can do is win our game next week," United manager Alex Ferguson said. "You never know what might happen in football. It's a crazy game. We are clutching at straws a little bit, but the important thing is to win our game."

"It was a very important step for our fight for the title," manager Carlo Ancelotti said of the victory at Anfield. "We played very well, we deserved to win. We are happy because it was a difficult step against Liverpool."

Didier Drogba's 33rd-minute goal had a big contribution from Liverpool captain Steven Gerrard. He tried to find goalkeeper Pepe Reina with a back pass, but it was intercepted by Drogba, who pushed the ball past the 'keeper and rolled it into an empty net.

Chelsea appealed for a penalty just before half-time when Salomon Kalou went down under a challenge by Lucas Leiva, but referee Alan Wiley waived the appeal, prompting an angry reaction from coach Carlo Ancelotti.

Lampard turned home a low cross from Nicolas Anelka for his 21st league goal of the season in the 54th minute.

West Ham lost 3-2 at Fulham, meaning they are still not safe and could be overtaken by Hull. Burnley and Portsmouth are already down.

Clint Dempsey collected a pass from Simon Davies to fire Fulham ahead in the 44th minute, and a shot by Chris Baird went in off the shoulder of West Ham striker, Carlton Cole, for an own goal in the 58th.

Cole put the ball in the right net to halve the lead, before Stefano Okaka made it 3-1.

Guillermo Franco hit the final goal of the game, for West Ham in the 90th.

West Ham have 34 points with one match to go and remain six points ahead of Hull, which visit Wigan today.

Today's other game is Arsenal at Blackburn.

In the race to join Newcastle and West Bromwich Albion as the clubs promoted to the Premier League, Blackpool captured a place in the promotion play-offs after drawing 1-1 with Bristol City to finish sixth in the League Championship.

The first round of the play-offs will be Nottingham Forest against Blackpool and Cardiff against Leicester.

Cardiff have not been in the top flight of English football since 1962 and Blackpool's last appearance there was in 1971.

Forest were in the third tier three seasons ago, so they are chasing their second promotion in three years. They finished last in the Premier League in 1999, while Leicester were relegated from the top flight in 2004.