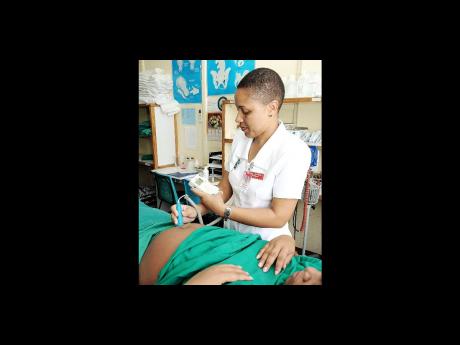 Sister Doreen Cushnie takes a reading, using the hand-held Doppler, which is a handy piece of equipment when checking a foetus' heartbeat, at the University Hospital of the West Indies in St Andrew. - Ian Allen/Photographer

A WOMAN arrived at the University Hospital of the West Indies (UHWI) at 8:30 a.m. last Friday, pregnant with a baby whose heart rate had decreased from 120 to 60 beats per second.

With the assistance of a portable ultrasound unit, provided by Friends of Labour and Delivery (FOLD), the problem was diagnosed and a crisis averted.

"If we used five more minutes to figure out what was wrong, the baby would have died," said Dr Leslie Samuels, chairman of FOLD and the UHWI's labour and delivery ward consultant.

FOLD is an organisation that helped with the improvement of the equipment and services provided to women dealing with high-risk pregnancies at the UHWI.

With financial help amounting to $10 million from the National Health Fund, as well as funds from other private sources, FOLD was able to make significant changes, transforming the labour and delivery ward into one that can also manage high-risk pregnancies.

The donations went into refurbishing the ward's foyer and purchasing 32 pieces of equipment, which were delivered on March 22.

"I believe this is the best place in the country to have a baby, full stop," Samuels said.

In order to achieve what the ward has so far, FOLD's secretary, Stuart Stimpson, said persons gave what they could.

"(The ward) didn't have to have these critical conditions and this was due to unavailability of resources," Stimpson said.

Samuels said now that the ward's functionality is where it needs to be, it is time to work on making the amenities more accommodating for patients.

"We can now maintain the standard of health care with less due to the equipment," he said, "and women will come in and be safe and comfortable."

FOLD plans on refurbishing the entire maternity ward, including bathrooms, as well as the midwives and nurses' rest-and-recovery area. This is with a view to making the ward more comfortable and providing staff support, especially to the nurses who Samuels described as the backbone of the health-care system.

Stimpson said the three goals in taking care of the labour and delivery ward are improvement in health care, more modern facilities, and long-term stability.

"We are trying to achieve a greater standard of care," he said.