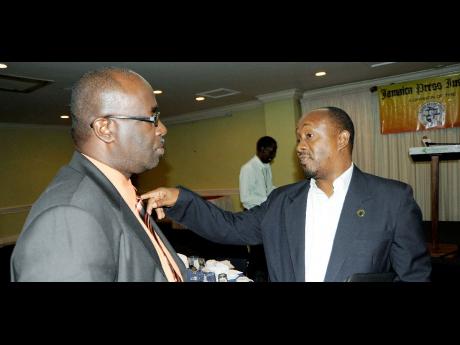 The Bruce Golding administration and the Media Association Jamaica Ltd (MAJ) appear to be on a collision course over planned changes to the airing of government broadcasts on radio and television.

However, the MAJ has indicated that it is willing to hold further talks before the issue becomes a major quarrel, which could result in a protracted legal battle.

"Do not let us go down the road of conflict, of resistance. Do not cause us to feel that we have to go and struggle over this one," declared Gary Allen, chairman of the MAJ, yesterday.

"Let us look for dialogue and a way to come out of this, with you achieving some of what it is that you want, but never impinging on the independence of the media in Jamaica," added Allen, who is also the head of the RJR Communications Group.

Allen was responding to a decision by the Golding administration to use the time allocated daily for government broadcasts - 45 minutes on television and 30 minutes on radio - in 13 blocks instead of the one or two blocks which now exist.

Prime Minister Bruce Golding had told the MAJ that the Government was adapting to a changing environment and adopting new strategies and methodologies in communicating its message to the public.

However, Allen and the MAJ argued that the change could distort media formats and destroy brand identity.

"Can you hear 10 government news headlines and three government features, 13 government news-related products in all, on all radio and television stations each day without them all sounding alike?" Allen asked as he addressed a Press Association of Jamaica (PAJ) function to mark World Press Freedom Day.

"Is it possible that we could do this without changing the format that has been constructed for these stations? And what is the economic implication of sounding the same, not being able to differentiate, and sounding as though you are a government entity?" Allen questioned.

But Allen's suggestion has been rejected by the prime minister, who holds the information portfolio through Junior Minister Daryl Vaz.

According to Golding, the change could "hardly be seen as having a negative impact on the viability and formats of commercial radio and television, as you have claimed".

But the MAJ countered by pointing to its request that the Caribbean Broadcasting Union and the Commonwealth Broadcasters Association (CBA) survey their members to see if they faced similar demands from their governments.

Allen said both entities had responded that this was unusual and unacceptable.

In fact, the CBA has since written to the Government, through the Jamaican High Commission in London, urging that the proposals be abandoned.

According to the CBA, it knows of no other country in the Commonwealth which has adopted such measures, and any such move by the Jamaican Government would damage the independence and credibility of the local media.

Allen appealed to the PAJ, which represents media workers, to support the MAJ in its quest to have the Government back down.

The commitment was immediately given by PAJ President Byron Buckley.

"We publicly take a stance supporting the MAJ in resisting that kind of arrangement. To me, that is a backward step taking us back to an era we have long left," Buckley said.