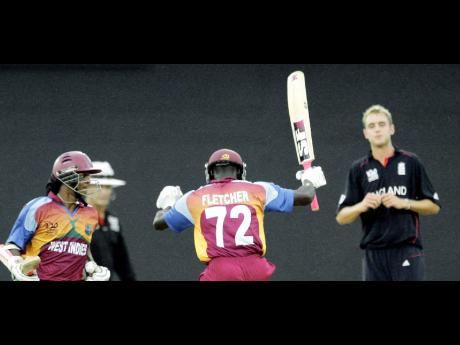 The West Indies enjoyed some luck with the weather yesterday to defeat England by eight wickets with a ball to spare in a rain-affected ICC World Twenty20 match.

Luke Wright contributed an unbeaten 45 off 27 balls and shared a delightful fifth-wicket stand of 95 off 57 balls.

The West Indies' reply was abbreviated after steady rain, and they eventually snuck home off the penultimate delivery to reach the Duckworth/Lewis revised target of 60 off six overs.

The home team's victory secured their place in the Super Eights, while England must avoid defeat in today's showdown with Ireland to join the hosts.

England captain Paul Collingwood was disappointed by the result.

"We're very, very frustrated," he said. "Ninety-five per cent of the time 191 runs is enough, but with Duckworth/Lewis it wasn't."

Earlier, England got a flying start from openers Michael Lumb and Craig Kieswetter after Gayle won the toss and decided to bowl first due to the uncertain weather.

Left-hander Lumb cracked four fours in 28 off 18 balls before he fell at 36-1 in the fourth over.

Fellow debutante Kieswetter compiled 26 off 14 deliveries, spiced with a four and three sixes, before he was leg before to left-arm spinner Nikita Miller at 66-2.

England were slowed after that by medium pacer Darren Sammy, who removed captain Paul Collingwood (6) and Kevin Pietersen (24). Collingwood played across the line and was bowled, while Pietersen, who hit one four and a six, slapped a catch to deep midwicket.

But Morgan and Wright changed tempo magnificently as England realised 76 runs from the last five overs.

Ravi Rampaul conceded 27 runs from the 18th over as the huge home crowd was silenced.

England slammed 11 sixes and 10 fours during their innings.

Medium pacer Darren Sammy led the West Indies with 2-22 off four overs, a performance that later earned him the Man of the Match award.