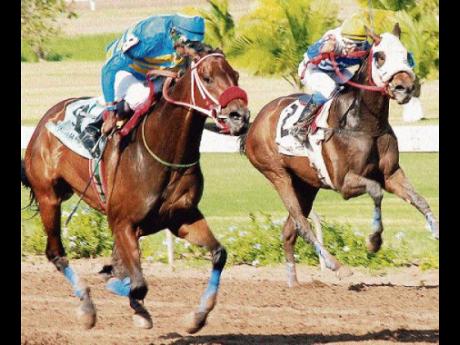 Open allowance horses hold centre stage at Caymanas Park today in the sixth running of the King's Plate over 1500 metres, the field including the talented Canadian-bred five-year-old mare PRICELESS BEAUTY.

The race has attracted eight starters and in addition to the likely favourite PRICELESS BEAUTY, others expected to run well are the vastly improved American colt, BURST OF ENERGY, BELOW THE WAIST, recent runaway winner LITTLE WASP and stable companion CLASSY PROSPECT, who shoulders top weight of 60.5kg.

Both are expected to figure prominently against more formidable opposition, having won their last races in overnight company.

However, it will more than likely come down to a straight fight between PRICELESS BEAUTY, under leading jockey Shane Ellis, and BURST OF ENERGY, the mount of bang-in-form apprentice Richard Mairs, who has ridden him to victory twice.

Mairs was aboard BURST OF ENERGY when the son of Drewman won the Fan Appreciation Day Trophy over 2200 metres, ahead of subsequent winner LITTLE WASP on New Year's Day.

It is interesting to note that both PRICELESS BEAUTY and BURST OF ENERGY finished heads-on for third and fourth places, respectively, in a fast-run 1300-metre race won by the highly thought of American colt, DOUBLE THE HONEY, both beaten by four lengths on February 12. The pair will definitely welcome the additional 200 metres today.

While I have every respect for the Gary Subratie-trained BURST OF ENERGY, preference is for PRICELESS BEAUTY who, given her superior pace, should get first run on her old rival and this should prove a decisive factor, especially with a milder pace expected.

Trained by Morris Powell, PRICELESS BEAUTY had won three consecutive races before losing to DOUBLE THE HONEY, and with her fitness not in doubt, should withstand the closing burst of the aptly named BURST OF ENERGY.

She is not too heavy, with 55.0 kg, to notch her fourth win from seven starts locally.

Other firm fancies on the well-supported 11-race programme are ROSE GOLD (working well) under champion jockey Omar Walker in the second; EMERGENCE to go one better in the third; LUSCIOUS under female apprentice Georgina Sergeon to stave off ERASMO in the fifth for three-year-olds over 1500 metres; along with DANCING GOLD, to beat TERRA MARIQUE in the sixth; and HOMBRE's half brother, HERMOSO AMIGO, in the eighth race for maiden three-year-olds over 1820 metres.

First-time runner GO GO YVONNE (left), with Shane Ellis aboard, makes all to finish ahead of KROLL (Dick Cardenas) in the 3-y-o and Up Maiden Condition event over 1200 metres at Caymanas Park on Wednesday.