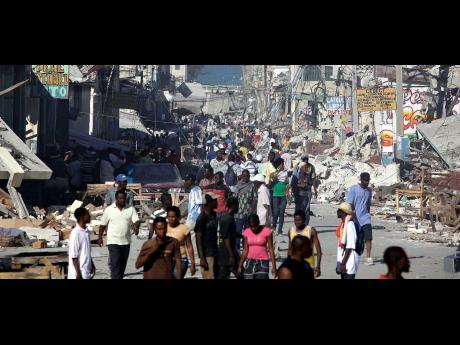 An increasing number of small businesses are helping the Dominican government play a larger economic role in rebuilding Haiti.

In the last three months, more than 100 Dominican companies have sold US$5.5 million in products, including bread and latrines, to non-profit organisations and United Nations agencies providing help in the aftermath of Haiti's devastating January 12 earthquake.

"The Dominican Republic has a built-in capacity to provide a quick and competitive response," said Eddy Martinez, director of the government's Center for Export and Investment, which certifies companies to do business in Haiti and helped organise an exhibition for their products in the Dominican Republic.

International leaders have pledged more than US$3.8 billion over 18 months to help Haiti rebuild from the quake, which killed an estimated 230,000 people and left 1.3 million homeless.

Dominican exports to Haiti fell nearly 20 per cent in January and February compared to the same period last year. The two countries share the Caribbean island of Hispaniola.

A government study on how the earthquake affected commerce with Haiti warned that the Dominican economy would continue to suffer if other countries become the main suppliers during the rebuilding.

The Foreign Ministry taught local business owners in March how to seek contracts with the UN and will offer another session next week.

Many of the companies are doing business in Haiti for the first time.

"I immediately began searching the Internet for ideas to create my own design," said carpenter Erasmo Morel, whose wood-furnishing factory on the outskirts of Santo Domingo expects to ship 10 homes to Haiti worth a total of US$35,000.

Grace Baptist Church will use them to house 60 orphans near the Haitian town of Ganthier, just east of Port-au-Prince. The children's orphanage in the capital was destroyed.

Miguel Nadal, a spokesman for Gerardino Real Estate Company, said that company also is selling prefabricated homes worth US$3,500 each. He has already made a presentation to UN and nonprofit officials, but has not received any offers.

The Dominican Republic earned a total of US$647 million in 2009 from goods exported to Haiti, including food, cement and zinc.