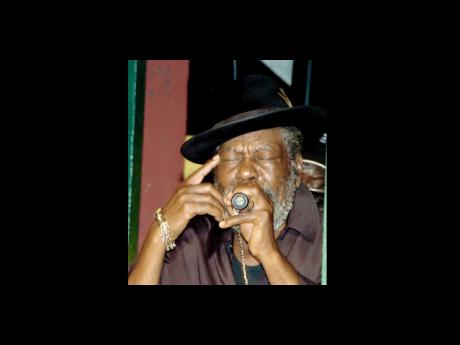 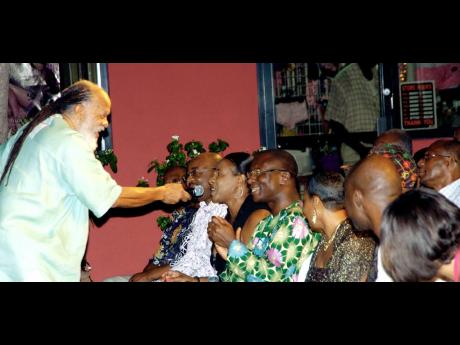 Ernie Smith shares the microphone with patrons at the Studio 38 Live series at Pulse headquarters on Sunday. - Photos by Winston Sill/Freelance Photographer
1
2

Having his right hand in his pocket at many points during his performance on the grounds of Studio 38, Trafalgar Road, New Kingston, last Sunday night, did not mean U-Roy was taking the gig lightly. But it certainly was a measure of how relaxed and steady he was on the beats provided by Lloyd Parkes and We The People Band, making his toasting art look deceptively easy as he left the bulk of the effort to his wide-ranging voice.

Then early in his showing, a smiling Ernie Smith noted that his birthday had been the previous day, but "I don't feel a day over 65". His voice, first recorded in 1967, has certainly not aged.

Sunday's double bill pulled in sufficient persons to fill the seats, but there were precious few standers, unlike some previous shows, as the fortnightly series turns the corner into its fifth month (with a postponement due to uncharacteristically good weather - rain). Pulse Chairman Kingsley Cooper introduced U-Roy as the godfather of all deejays in the world and, clad in all black, he soon informed all that "this station rule the nation", standing with the musicians on the stage.

The ground was only a small step down and U-Roy took it as the horns sounded, alternating between a closer encounter with the audience and the companionship of the musicians as he performed. On the third song, at "you cheated and you lied", the audience cheered wildly and a smiling U-Roy said "respect, respect" to start again.

The songs were done like the original recordings, in full and faded at the end. It was clear that U-Roy, who runs Stur-Gav sound system, merges his selector's role with his deejay persona, saying before the closing Wear You To The Ball "so it is time for another musical disc/with a flick of my wrist". The songs kept rolling as did the distinctive toasting, the audience chirping along with "rock chi chi bop" and "chi ca bow". Soul Rebel was a favourite, Queen Majesty was restarted based on the reaction to just the melody and when U-Roy's voice rose into "Jah Jah call you!" on his penultimate song, there was the rapturous response and restart.

On the closing song, as he chanted "shake baby shake", U-Roy went into a faux boxer's stance, throwing gentle lefts and rights, saying a last respect before he left.

Smith on a roll

The break was relatively brief, Cooper making it clear that they were keeping the show rolling (and it did end uncharacteristically early, closer to 11 p.m. than midnight). When Smith announced that he had celebrated his birthday on Saturday, Parkes commented, "If you know him as Glen, you know him long time."

Long time or not, Smith was on a roll - with his often deep, rolling voice - from the get-go, as he started with One Dream to get the audience rocking right away. When he came off the platform with a little hop, singing of a "beggar who would truly ride", a car screeched away from the nearby stoplight; Ben' Down and Ride on Sammy followed.

It wasn't all sunny songs to go with a sunny smile, though. On Deadly Night in Kingston (a reworking of Rainy Night in Georgia), he addressed the fragility of peace in the city and on All For Jesus, he spoke to his human fragility. "I woke up one Sunday morning about 6:30 after a night of heavy drinking. And the words of this song just came to me, you have to change you life," Smith said.

Then it was back to the more light-hearted, though certainly not light in terms of lyrics and topic, fare with Life is Just for Living and That's The Kind of People We Are.

He would have ended with Duppy or Gunman, but Cooper insisted on more, wringing a few more songs out of Smith (including Pluto Shervington's Ram Goat Liver), the audience cheering as Smith eventually borrowed the guitarist's instrument to play as he sang Sunday Morning Coming Down.