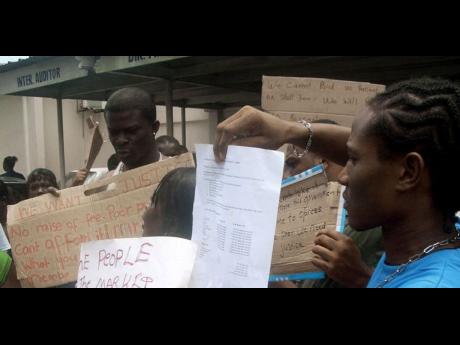 Vendors from the Musgrave market in Port Antonio, Portland took to the streets Monday. - Photo by Gareth Davis

Approximately 100 irate market vendors in Port Antonio took to the street, on Monday, in a massive but peaceful demonstration, protesting a 100 per cent increase in vending fees imposed by the Portland Parish Council.

The vendors, who first converged on the corridors of the parish council office shortly after 9:30 a.m. Monday, chanted "we want justice, not extortion", while waving placards; one of which read, "the council is robbing us, they are heartless".

The vendors were protesting the increase in vending fees up from $200 per week for each stall, to $400 per day under the new increase, which took effect as of May 1.

"We are being oppressed by the parish council," said Viveen Lawrence, a spokesperson for the irate vendors.

Continuing, Lawrence said "They are inconsiderate in asking us to pay $400 dollars a day for each stall occupied by us. We had an agreement with the council that a 50 per cent increase in vending fees would be put into effect, But now, they have instead, issued a document stating that those who are in arrears are to pay $400 for a stall per day, while others not owing are to pay $200. It is unfair to us."

The recent increase by the council has been met with strong criticism from the more than 140 vendors at the Musgrave market in Port Antonio, who are now calling for dialogue with chairman of the council, Mayor Floyd Patterson, who was absent from office during Monday's protest.

Former Mayor Rupert Kelly, who spoke on behalf of the parish council, told The Gleaner yesterday that any form of increase would have been rejected by vendors, despite the alarming utility bill facing the council each month from the Musgrave market.

"Whether the increase was high or low, it would still be rejected," said Kelly.

"I must however, admit that some aspects of the increase might be a little exorbitant, the reality is that the council is subsidising the market by $250,000 each month for utilities. Electricity cost at the market is in excess of $220,000 each month, and water is anywhere between $75,000 and $80,000 per month.

Therefore, when we collect vending fees for the month, it does not cover the actual amount needed to be paid to the utility companies."

Kelly, however, noted that the council was open to negotiations in an attempt to arrive at an amicable solution.

Approximately $2.1 million is owed by vendors in unpaid vending fees at the Musgrave market.