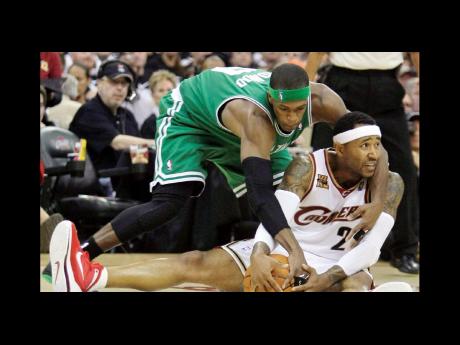 Boston Celtics' Rajon Rondo and Cleveland Cavaliers' Mo Williams (2) fight for possession in the fourth quarter of Game 2 in the second round of the NBA basketball play-off on Monday in Cleveland. The Celtics won 194-86 to even the series at 1-1. - AP

The Boston Celtics responded to hasty dismissals of their NBA play-off chances, by beating the Cleveland Cavaliers 104-86 on Monday night to square their second-round series at a game apiece.

Rajon Rondo tied a team play-off record with 19 assists, Ray Allen scored 22 points and the Celtics showed they are still very dangerous despite their advancing years.

Having blown an 11-point lead in the third quarter of Game 1, the Celtics almost squandered a much bigger one Monday. They led 91-66 with 9:08 left, but the Cavs scored 15 straight and pulled within 93-83 with 3:13 left. Boston, though, closed with an 11-3 spurt to level the series ahead of hosting Game 3 on Friday.

LeBron James scored 24 and Antawn Jamison 16 for Cleveland, outscored 31-12 in the third.

In Phoenix, the hosts fought off third and fourth-quarter comebacks to beat San Antonio in the series opener.

After resting his sore hip for three days, Steve Nash had 33 points and 10 assists for the Suns. Jason Richardson scored 27 and Amare Stoudemire had 23 points and 13 rebounds.

The Spurs had won four straight Game 1s against the Suns, two of them in Phoenix. Both of those times, in 2005 and 2007, the Spurs went on to win the NBA title.

In the second half, the situation seemed ripe for another of those San Antonio daggers to the Suns' heart.

Stoudemire sank two free throws, then after the Spurs twice missed three-pointers, Grant Hill made two from the line to put the Suns ahead 98-93.