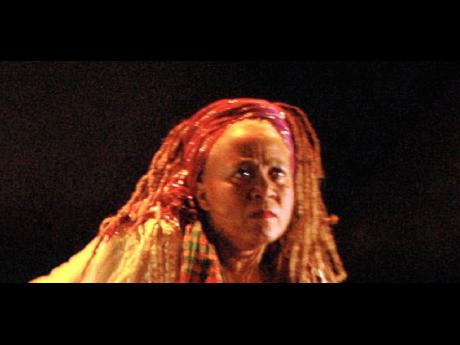 The dance concert staged by L'Acadco at the Philip Sherlock Centre for the Creative Arts (PSCCA) on the weekend was full of exciting visuals. Photographs were frequently projected on to the backdrop, the costumes were gorgeous, the dancing was energetic and acrobatic and the lighting colourful.

Additionally, the varied music always pleased. But there was something more, something unusual in a dance concert. The spoken word and, more generally, the voice, featured powerfully throughout the two-and-a-half-hour-long show.

Anyone knowing Dr L'Antoinette Stines, the company's founder, artistic director, chief choreographer and producer, would not be surprised at the addition of dialogue to dance. She delights in pushing against the orthodox boundaries of creativity.

And she is as ambitious as she is creative. During the intermission, she told The Gleaner that she would love to take the show to Broadway. A mere hour later, her vision had enlarged greatly. New York City's Great White Way had quickly become just one stop in a longer journey.

Addressing the audience as part of the curtain-call ceremony, Stines declared, "I have a dream of taking the show on a global tour. Pray for us." Can her dream be realised? Well, the company has a lot going for it.

There is a talented and experienced artistic team which is headed by Stines and includes her son Aaron Vereen, the musical director; her daughter, Amanyea Stines-Jones, an assistant coordinator; and such well known personalities in theatre as Paul Hamilton, Leonie Forbes, Fabian Thomas and Howard Daley.

There is, too, the large cast with more than a score of energetic, well-trained dancers - many graduates or students of the Edna Manley College School of Dance and institutions abroad. And there is excellent material for a good show - the production concept, technical design, choreography, costumes, décor and props.

In designing the show, Stines told The Gleaner she asked the simple question, "Why does the curtain have to close after every dance?" The obvious answer "It does not" led to the show having, in the first half, an uninterrupted flow of what was originally 13 separate dances. The result is the impression - whether Stines planned it or not - that one is watching one long dance drama.

Because the mind instinctively tries to connect juxtaposed events thematically or causally, that 'dance drama' is seen as the story - told in dance, music and song - of the journey of black people from Africa to the New World and their adaptation to life in the West.

We see Africans of 500 years ago enjoying themselves in their homeland, then the suffering of the Middle Passage, and the early days of slavery - in the field and in the Great House. Later, we see American and Caribbean people occupied with both the joys and the pain of present-day existence.

A journey towards happiness

Naturally, the physical and psychic journey is not always pleasant, but the general trajectory of the history is toward happiness, self-discovery and self-acceptance.

Two of the first three dances, all set in Africa, are choreographed by Stines and have the remembrance of the orishas (spirits) as their theme. The third dance, choreographed by Vereen, is about a young man's initiation ceremony.

Later, dances take us to the interior of a slave ship, then to a slave auction and later to the abolition of slavery. 'Chat Bout' (by Stines), a dance with poetry recited by Davian 'Johnny' Grant about outstanding black men and women, ends the first part of the concert.

The dances in that first segment mainly followed a historical time line, but in the second part the unconnected items had diverse themes. After the coherence of the first part, the second seemed disjointed and hence weaker.

Fabian Thomas, who portrayed a sort of narrator in the show carrying a coconut and an African chief's switch, introduced the first post-intermission item with a speech about drums, including steel drums. The item was 'Drumology', led and composed by Vereen, an exciting mélange of sounds and instruments played by nine drummers, one a young woman.

'Jezebel' (by Jacquelline Logan) was a solo dance by dance prodigy Amanyea Stines-Jones, who has been outstanding since she started dancing at age eight. She choreographed the final, joyous number, 'Hope', which ended the intriguing, multimedia show on a positive note.

Other choreographers were Barbara Ramos-Caballero (with 'Desperacion', a solo by Adrian Wanliss); the latter's own work, 'Clashes of Desires', about a woman with many lovers; and Renée McDonald, whose 'Stages of Love' featured Stines-Jones and Wanliss.

One highlight of the show was a short dance by the well respected and much loved dance teacher and choreographer Patsy Ricketts. The applause that greeted her appearance was as enthusiastic as that given Dr Stines when she, too, performed a brief dance. The most prolonged applause, though, came in the standing ovation given the concert at its end. Every minute of it was deserved.