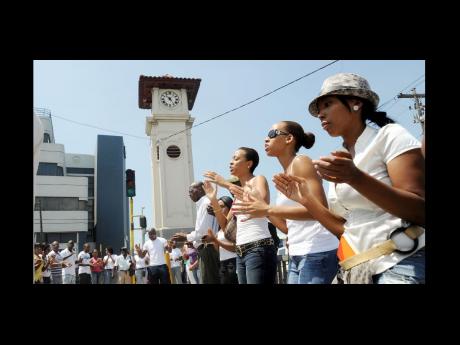 Rocked by the shooting of one of the nation's more popular dancehall singers, members of Jamaica's entertainment community are declaring it time for artistes to stop glorifying gunmen.

Singers, deejays and others flocked the clock tower in Half-Way Tree, St Andrew, for a vigil around 9 a.m. yesterday after hearing news that Oneil Edwards, a member of dancehall trio Voicemail, had been shot earlier in the morning.

Wearing white and hoping for the best, Edwards' friends and colleagues prayed and sang for his recovery.

Singjay Mr Vegas, whose real name is Clifford Smith, prayed for God's mercy and pleaded for a second chance at life for the critically injured Edwards.

"The people that some of us big up in the music are responsible for this," Mr Vegas declared.

"This is an indicator that we need to stop it. Too many people are dying."

Mr Vegas called for those who know better to reach out to other artistes and speak out against the brutal murders plaguing the island.

Bugle, another dancehall entertainer, while saying he did not promote violence in his music, cautioned against the dancehall industry sending mixed messages.

"People get kill every day. I don't want dem make it seem just because one a wi own get shot we did a'right wid it before and now we have a problem. You know people have a way fi twist what you say," he said.

D'Angel, who was present at the vigil, later told The Gleaner she was saddened that her co-worker and friend had been injured.

She would like to see an immediate and sustained ban on violent lyrics. Dancehall should be brought back to its happier days, she said.

"While it is each to their own based on what is happening right now, this is not what was happening in the beginning. We need to bring back dancehall to when it was happy," she said.

Edwards was shot several times by gunmen as he attempted to enter his home in Duhaney Park, St Andrew.

He was admitted to the Kingston Public Hospital (KPH) in critical condition before being transferred to another medical facility yesterday afternoon to undergo more tests.

Curious passers-by in the busy Half-Way Tree area, many having not yet heard about the shooting, stopped to find out what was going on.

The entertainers soon moved to a nearby tree where Mr Vegas, a professed Christian, read from the biblical book, Psalms, and gave regular updates on Edwards' condition. Singer Alaine led the group in a heartfelt prayer as everyone held hands.

Deejay Stacious was almost in tears as she urged persons to pray for their friends and families and not wait for a tragedy to keep them in their thoughts.

Chynn told The Gleaner: "I woke up this morning to a million BB (BlackBerry) messages saying what happened. I'm just devastated. I know him personally and he's one of the nicest guys and, for something so negative to happen to him, it just wrenches my soul."

Singer Raine Seville added: "It's really sad that we feel like we are being forced to live in fear and sadness because of these gunmen and evildoers. Oneil is a music brother, a friend and a great person. It hurts to see him suffer this way, and we are all praying for him and leaving it up to God."

In a statement released to the media, Minister of Youth, Sport and Culture Olivia Grange condemned the attack and wished Edwards a speedy recovery.